The mermaid of the Mediterranean rises

The mermaid of the Mediterranean rises 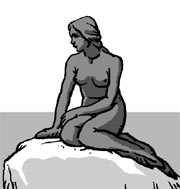 The poem by German poet Heinrich Heine about the Lorelei rock on the eastern banks of the Rhine evokes romantic imagery. In “The Lorelei,” the “air is cool, twilight is falling and the Rhine is flowing quietly by.” The folktale about fishermen who were so captivated by a sea nymph that they wrecked their ship on the rock makes the location even more mysterious. Those who have actually visited the rock, however, are often disappointed. And to Koreans who are used to extensive mountain ranges and dramatic landscapes, the 130-meter-tall rock is not very impressive. For them, the Rhine is not as picturesque as the splendor of the Namhan River.

In fact, the Lorelei is one of the top three most disappointing spots in Europe. Despite the fame and stories associated with these tourist attractions, visitors often say the sites have failed to meet their expectations. Another disappointing site is Manneken Pis in Brussels, which features a small bronze sculpture of a naked boy urinating into the fountain. The legend behind it says that a little boy saved the city of Brussels by urinating on a burning fuse when foreign forces set fire to the city. If you had expected to see a sculpture as grand as the legend, you will be sad to discover that the 61-centimeter-tall sculpture looks more like a toy. Moreover, the original sculpture is kept in a museum, and the fountain near Brussels Town Hall contains only a replica. The third disappointment is the Little Mermaid sitting on a rock in Copenhagen’s harbor. It was inspired by a tale by Hans Christian Andersen about a mermaid who falls in love with a prince. A mermaid also appears in Greek mythology as the siren who seduces Odysseus. Therefore, there are two symbolic images of mermaids - she is the heroine of a tragic fairy tale and a femme fatale in mythology. So visitors to Copenhagen may be expecting a mysterious, fatally charming half-human, half-fish figure sitting on a rock. Once there, however, visitors discover that, at just 80 centimeters tall, the Little Mermaid is little indeed.

Tripoli, the capital of Libya, is nicknamed “The Mermaid of the Mediterranean.” Its white buildings and turquoise waters create a spectacular scene indeed. Anti-Qaddafi forces code-named the operation to bring down the dictator “Mermaid Dawn.” As the 42-year-long rule of Muammar el-Qaddafi ends, the city of Tripoli is sure to be transformed. We all hope to see Tripoli born again and reclaim its title as the Mermaid of the Mediterranean.

*The writer is an editorial writer of the JoonAng Ilbo.