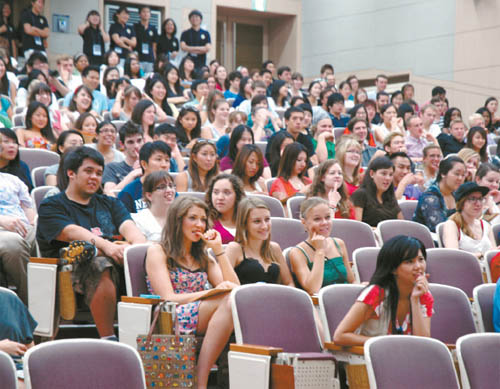 About 570 foreign students from 30 different countries listen to a presentation during Yonsei University’s fall semester orientation, which was provided by the Seoul Global Center and the school regarding transportation, housing and medical referral service information in Seoul, on Wednesday. Provided by Seoul Global Center

The Seoul Global Center began its mission of helping orient the growing number of international students who flock to the city by giving freshmen at Yonsei University tips on diverse subjects from housing to banking this week.

Staff from the center participated in the school’s 2011 fall semester orientation session on Wednesday, offering tidbits on where to find the best medical service and how to navigate the capital’s public transport network.

To lighten the mood and help students bond in a land far from home, they encouraged some of the 570 young people in attendance to perform a show. One Japanese lady reeled off a K-pop song by hit girl band KARA.

“It was just a small event aimed at fostering greater intimacy among new foreign students,” said Jeong Sang-yeob, one of the organizers.

“I wanted to help them because they probably feel a little awkward being overseas due to their lack of information and language skills. I know, because I had such an experience in China.”

SGC said it will perform a similar service at Chung-Ang University and Hankuk University of Foreign Studies.

Called the International Student Exchange Program Orientation, Wednesday’s event drew hundreds of students from 30 countries. They were prepped up on what to expect from the coming semester and taught how to register and use the school library.

After the basic session, SGC chief Alan Timblick welcomed the new arrivals, introduced a number of useful guide books and informed them of English-speaking services for eventualities such as medical emergencies.

“We decided to participate in the orientation to help foreign students survive in Seoul and eliminate unnecessary hassles,” Timblick said “What we are trying to do for the students is show them that Seoul is to be remembered as a fun, enjoyable and convenient place when they get back to their countries.”

There are about 60,000 international students in Korea, half of them in Seoul, he said.

SGC mostly offers free counseling and consulting services to students who may be experiencing legal or personal problems.

Cases may range from legal wrangles with landlords to individuals who feel isolated from their families and friends back home.