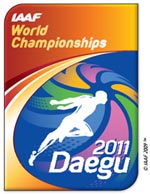 DAEGU - The World Championships in Athletics kicked off on Saturday, carrying the high hopes of Koreans and organizers, who hope this biennial event from the International Association of Athletics Federations goes down as the most successful in the competition’s history.

The Worlds in Daegu, which is the largest IAAF event in history with 1,945 athletes from 202 countries, looked as if it got off to a good start. Since the city won the bid in 2007, skeptics have voiced concerns regarding the unpopularity of track and field in Korea.

Koreans were enjoying the athletics competition with their families and friends. Most were excited to see the third-biggest sporting event - behind the Summer Olympics and the FIFA World Cup - on their soil.

“I’m very excited that I can see this kind of world event,” said Kim Myung-il, a 52-year-old businessman who visited the stadium with his wife. “I’m more into baseball, but I think track and field is also fun to watch.”

The opening day atmosphere reached its peak when the “fastest man on earth” Usain Bolt appeared in his first round of the 100-meter sprint. Crowds roared and cheered the Jamaican’s race. Koreans were supportive of their fellow countrymen’s performance as well.

However, despite great support and excitement in Daegu Stadium, there were some few embarrassing operational problems from the opening day, which led to an uncomfortable experience for some visitors.

The bad signs began with the delayed opening of Color Square, a mall located near the west side of Daegu Stadium. Originally, the shopping mall was to open before Saturday with some 160 stores, including the International Broadcasting Center, a movie theater, restaurants and major retail shop Home Plus.

But until the opening day, only IBC and Home Plus had received the necessary approvals from the city government for operation - and they were only temporary. And last week, Home Plus announced that, due to safety concerns, it would delay the opening of its store until Sept. 6, two days after the final day of the Worlds.

Other stores were still in the late stage of construction. The organizers said wage problems with workers have forced the construction behind schedule, and the mall is expected to be fully opened in the middle of next month.

The closed-door restaurants in the mall caused long lines in the food booths outside the stadiums, and it looked almost impossible to keep the area clean as there were only a few small garbage cans around the stadium.

The worst problem came toward the end of the event, as spectators tried to make their way home.

Most fans started to leave the stadium at about 10:30 p.m. The majority followed organizers’ advice and moved to the station across from the stadium where attendees could ride free shuttles or take the subway back to their homes or hotels.

However, at the bus stop there were no gates or barriers to divide the lines. Only some 20 volunteers were trying to keep the lines in order. Police came later to sort out the situation, but it was too late to control the crowds. Some quarrels between people were seen and it took nearly 30 minutes to take a bus.