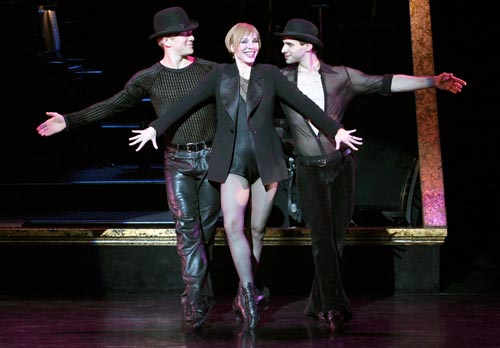 In this theater image released by the Publicity Office, from left, Ryan Worsing, Charlotte d’Amboise and Michael Cusumano are shown during a performance of the musical “Chicago” in New York. [AP/YONHAP]


NEW YORK - The threat of Hurricane Irene didn’t stop the cast and crew of the musical “Chicago” from celebrating a Broadway milestone Friday night with cake and a very big knife.

At a small backstage party at intermission, the show marked its 6,137th performance - tying “A Chorus Line” for the fourth-longest-running show in Broadway history.

A loud cheer went up when Christopher Sieber, who stars as Billy Flynn, toasted the cast with nonalcoholic sparkling wine in the wardrobe room at the Ambassador Theater.

Bebe Neuwirth, who played Velma Kelly back when the revival began its near-15-year streak, then plunged a large knife into a vanilla sheet cake decorated with a classic “Chicago” image of a sexy murderess.

“Nice, Bebe, nice!” roared a member of the ensemble. Then Neuwirth, Sieber, Charlotte d’Amboise (a veteran Roxie Hart) and Nikka Graff Lanzarone, the current Velma, cut slices of the cake and passed them around on blood-red plates with red plastic forks.

The next performance of the John Kander and Fred Ebb musical will give it sole possession of the fourth-place spot. Because of Irene, that show has been pushed back to today.

When it finally leaps over “A Chorus Line,” “Chicago” will also become the longest-running American show in Broadway history.

Ahead of it are “The Phantom of the Opera,” “Cats” and “Les Miserables” - all British imports.

“What it says to me is that it stands the test of time,” said Carol Woods, who has played Matron “Mama” Morton in the show for over a decade. “People will always come and be entertained.”

Set in the 1920s, “Chicago” is a scathing satire of how show business and the media make celebrities out of criminals. It has Bob Fosse-inspired choreography, skimpy outfits and killer songs such as “All That Jazz,” “Cell Block Tango” and “Mr. Cellophane.”

“If anyone had told me it would be around for almost 15 years, I would have laughed at them,” said Donna Marie Asbury, who has been playing June since 1999. “The material is just so good and the team is so wonderful. It’s been an amazing ride.”

The vaudeville-flecked revival, which began performances on Oct. 23, 1996, snagged six Tony Awards - including best musical revival - and a Grammy Award.