Photo show has poetry in black and white

Photo show has poetry in black and white 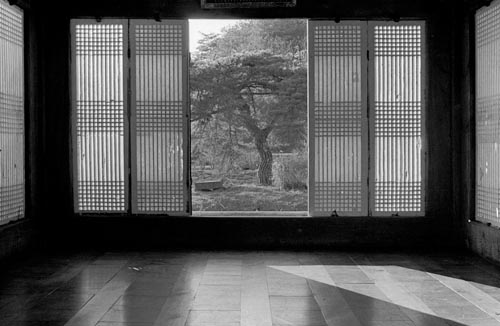 Soft light streams through half-open windows to illuminate empty rooms, making pools of patterned light on the floor of a hanok, or a traditional Korean house, in one of the photos now on display at the Daelim Contemporary Art Museum in central Seoul. Other photos at the museum show the wooden doors of another old hanok and stone sculptures with simple forms and rough textures.

These photos, taken by Joo Myung-duck from the 1960s to the present, document the gradual disappearance of these old-fashioned residences yet also stand alone as poetic works of art.

They also show that the work of the 71-year-old veteran, who started out as a photo journalist, cannot be easily categorized.

The photographer’s ongoing solo show at Daelim, on the new art street west of Gyeongbok Palace, is entitled “My Motherland.” 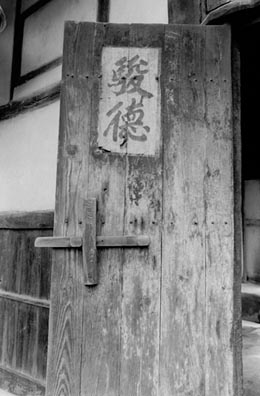 “Kangneung, 1980,” top, and “Andong, 1979,” above, are two of the 130 black-and-white photos by veteran photographer Joo Myung-duk that are now on display at the Daelim Contemporary Art Museum in Tongui-dong, west of Gyeongbok Palace in central Seoul. Provided by the museum

In his work, Joo has always focused on Korean people and things. His first solo exhibition in 1966 sent a shock through Korean society. Titled “Mr. Holt’s Orphanage,” the exhibition featured photos of mixed race children, born of U.S. soldiers and Korean women, who had been abandoned and left to fend for themselves.

Since then, Joo has depicted various aspects of Korean life though calm and meditative black-and-white photos.

Joo’s current exhibition is the last in a three-part series of solo exhibitions at Daelim. The first in the series, “Cityscape,” in 2008, showcased his photos of city life and the 2009 “Landscape” show focused on nature.