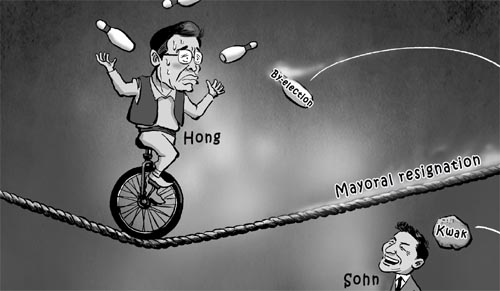 Ruling Grand National Party Chairman Hong Joon-pyo has plenty of balls in the air after the resignation of Seoul Mayor Oh Se-hoon. Democratic Party Chairman Sohn Hak-kyu might enjoy his distress, but he’s got a problem, too, after Seoul Metropolitan Office of Education Superintendent Kwak No-hyun’s admitted yesterday he gave 200 million won ($184,600) to a former election rival who eventually dropped out of the June 2010 race.