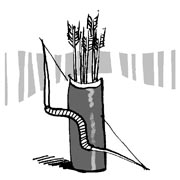 The ultimate weapon of the Persian army was arrows. In the Battle of Thermopylae, the Persians managed to besiege the Spartans and win the epic war with a barrage of well-aimed arrows. The Spartans, however, didn’t have a single archer. It’s not that they didn’t know about the weapon. In the Iliad, which depicted the time period about 800 years ahead of the Battle of Thermopylae, the Greek hero Achilles was killed by an arrow shot by Paris of Troy. Perhaps that is the reason that the bow was considered a cowardly weapon and could not be used by a true warrior until the 5th century B.C.

Later, the bow would come to be defined as the weapon of the common people. In his book “A History of Warfare,” British general Bernard Law Montgomery, who led the victory in the World War II, explained that longbows were for farmers, while crossbows were for knights.

In the history of weaponry in Korea, the bow has been popular throughout time. It is no coincidence that the progenitors of the three major kingdoms - Jumong, the founder of Goguryeo; Jak Jegeon, the grandfather of Goryeo’s founder Taejo Wanggeon; and Lee Seong-gye, the founder of Joseon - were all great archers.

The history of bow manufacturing is also interesting. Gu Jincheon, a maestro who lived during the King Munmu-era of Silla, was known for producing a great bow capable of shooting arrows as far as 1,000 yards. Although he was summoned by the third Tang Emperor Gaozong, he refused to provide his bow manufacturing technology despite the threat of severe punishment.

Now, we have a new film that glorifies archery and Koreans’ capabilities as archers. “The Ultimate Weapon” combines dazzling special effects, a tense plot line and the thrill of the chase to tell the story of master archer Nam-yi (Park Hae-il) and his quest to rescue his sister Ja-in (Moon Chae-won) from the Qing Dynasty. The film has already attracted 3.5 million viewers since its release on Aug. 10. That’s probably not a surprise given Korea’s command of archery and Koreans’ dominance of the sport.

However, it is unfortunate that the film is set during the second Manchu invasion of 1636, when the Joseon Army’s defense system was being transformed with developments in explosives and fortress construction.

It would have been better if the movie had been set during the victorious Battle of Cheoin in 1232 when the Mongol General Sartai was killed by our monk general Kim Yun-hu.