The heart-pounding thrill of the race

The heart-pounding thrill of the race 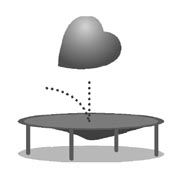 The heartbeat is a sign of life, but can also provide a pretty good indication of a person’s emotional state. When we fall in love, the pulse quickens and we feel a flutter of electricity coursing through our veins. When we are upset and become agitated, frightened or insecure, the heartbeat goes up as well. Your heart starts to beat faster because the heartbeat is ruled by the sympathetic nerve, which is activated by a hormone produced by the brain when you receive external stimulation.

And, from art and literature to pop culture, the heart is symbolic of love.

Poet Gwon Hyeok-ung wrote: “My heart palpates because someone is pounding on the other side of the door.” Kim Ae-ran’s novel “Pit-a-pat My Life” is about a pregnant 17-year-old girl who listens to the heartbeat of her baby.

“The Best Love” was one of the most popular series on television in the first half of the year, and its theme song - with lyrics that go: “because of you, my heart is pounding” - is about the fluttering hearts of lovers.

In French, the sound of a heart going pit-a-pat is “padam padam.” The phrase was part of French singer Edith Piaf’s 1951 song “Padam ... Padam ... .” In Korea, the phrase is part of the title of new broadcast channel jTBC’s opening series “Padam Padam: His and Her Heartbeats” starring film actor Jung Woo-sung.

The average human heart beats about 75 times per minute. But athletes have heart rates that are much lower than this. When a heart becomes stronger through physical activity, it can provide more blood with less pumping. Footballer Park Ji-sung is famous for his low heart rate and earned his nickname, the “oxygen tank,” for his relentless energy and vitality. At one medical checkup, Park’s heart rate was just 40 beats per minute. Marathoner Hwang Young-jo’s heart rate was 38 beats per minute at the height of his athletic career.

At the men’s 100-meter final at the World Athletics Championships in Daegu, world-record holder Usain Bolt was disqualified after a false start in a race he was expected to win. Bolt’s heart must have raced when he heard the shot signalling the false start. It was a gripping moment for everyone watching, as well. The winner of the race was ultimately determined by 0.1 second, which is not even enough time for the heart to beat once.

Next time you are confused, listen to the beat of your heart because it can tell you so much.