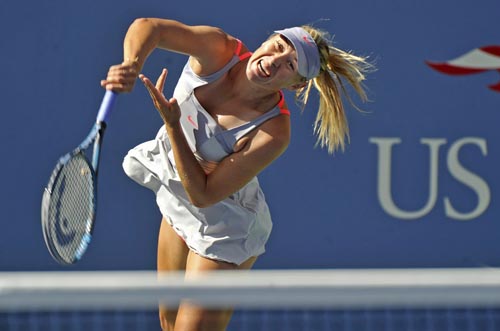 Russia’s Maria Sharapova battles back from a set down to defeat Britain’s Heather Watson during the first round of the U.S. Open at Flushing Meadows in New York on Monday. [REUTERS/YONHAP]


New York - Maria Sharapova came back from a set and a break down against 19-year-old Heather Watson of Britain to win 3-6, 7-5, 6-3 in the opening round of the U.S. Open on Monday.

“It’s just a matter of belief within myself, that no matter how well or bad or good I’m playing, or my opponent is playing, I know I can tough it out,’’ the No. 3-seeded Sharapova said after her two-and-a-half-hour victory.

She won six Grand Slam matches at Wimbledon alone this summer, reaching the final there before losing to Petra Kvitova. Fresh off that triumph, Kvitova - a 21-year-old from the Czech Republic seeded No. 5 at Flushing Meadows - failed to follow it up, flopping at the U.S. Open with a 7-6 (3), 6-3 loss to 48th-ranked Alexandra Dulgheru of Romania.

Kvitova is the first reigning Wimbledon women’s champion to lose her first match at the U.S. Open in the same season. Only three times had the Wimbledon winner bowed out as early as the third round in New York: Sharapova in 2004, Conchita Martinez in 1994, and Billie Jean King in 1973.

“This is something new for me,’’ Kvitova said about her new status as Grand Slam champion. “I’ve felt a little pressure.’’

“It’s always nerve-racking to play the first match after a layoff in a major. It’s not really my first choice at all,’’ said Williams, who pulled out of recent tune-up tournaments because of a virus.

Federer, owner of 16 Grand Slam titles, was not at his sharpest against the 54th-ranked Giraldo, dropping his serve three times and making 35 unforced errors.

“I don’t care how I do it,” he said. “It doesn’t need to be pretty. I don’t think I’ve ever played my very, very best in the first round.” Federer now trails only Jimmy Connors’ career total of 233.