A grand disguise for a malodorous deal

A grand disguise for a malodorous deal 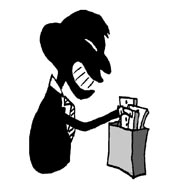 A true relationship begins in good faith. There is no place for tricks. Deals, however are often made with malicious intent. When making a deal, you generally make sure you have an advantage even if you are forced to compromise. And people who make deals in politics often use grand arguments about justice to disguise their true motivations: money, honor and power.

Scholar Park Ji-won, who is also known as Yeonam, saw through all of this. He satirized the hypocrisy of government officials and aristocrats in his novel “Majangjeon,” or “Story of a Horse Dealer.” In the story, the horse dealer cynically says that relations among aristocrats are similar to horse dealing because the truth is hidden and tricks are used. As the novel says: “When crossing a stream, a rich man covers his shoes to prevent mud from ruining them. He prizes even the soles of his expensive shoes, so you can imagine how highly he thinks of himself.” The novel concluded that “in friendship, it is natural for a poor man to value fidelity or sincerity, but a rich man cares nothing for these values.”

Legally speaking, a deal negotiated in “good faith” is made with honest intention while a deal negotiated in “bad faith” is done with malicious intent. Civil and trade laws are based on whether a deal was made in good or bad faith, and the scope of protection is set accordingly. The rules of business are based on mutual benefit, but when a deal is broken, it can bring down both parties.

As a scholar of law, Kwak No-hyun, superintendent of the Seoul Metropolitan Office of Education, should know the dangers of deal making. But he initially said that the 200 million won ($186,133) he gave to Park Myong-gee, a professor at the Seoul National University of Education, before last year’s superintendent election was an offer of good faith. Instead, it has come to light that the money was given to Park so he would withdraw from the race. It was also revealed that Kwak did not make good on his promise for months.

It was clever of Kwak to say that he was innocent because the money was handed over in good faith when in reality he was just trying to vindicate himself.

In life, sometimes, you cannot avoid a foul smell. But when you are constantly exposed to an offensive odor, your senses become paralyzed. What will our children learn from an educator who proudly claims he offered money in good faith when he essentially bought off his rival?