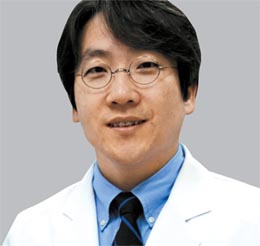 Alzheimer’s disease, a so-called “murderer of memory,” is known to prey on the elderly.

According to data from the Ministry of Health and Welfare, the neurodegenerative disease occurs in one out of 10 Koreans aged 65 or older. And that ratio has been rapidly increasing in recent years. Fear of Alzheimer’s is growing as the population’s life expectancy rises.

Early detection of the disease can make it easier to treat and slow the pace of its progress. However, only a minor portion of Koreans actually visit the hospital for regular checkups.

Yu Kyung-ho, a medical doctor and professor of neurology at Hallym University Medical Center, has been at the forefront of developing a computerized program to diagnose Alzheimer’s disease. In a recent interview with the JoongAng Sunday, he shared his expertise.


Q. Why do you think the portion of Alzheimer’s patients among the elderly is so high?

A. There are several causes, but an aging society seems like the biggest reason. Alzheimer’s disease is one kind of dementia and makes up the largest portion among all kinds of dementia. Alzheimer’s disease, a neurodegenerative type, starts when amyloid-beta, an abnormal type of protein, accumulates in the brain. Then nerve fibers and a variety of bodily waste get tangled to form condensed substances that build up in nerve cells - mostly in the hippocampus, a major part of the brain that plays an important role in consolidating information from short- and long-term memories.

As the disease develops, other parts of the brain see an increasing accumulation of the condensed substances. The accumulation reaches a stage in which symptoms of Alzheimer’s disease surface when the person becomes 60 to 70 years old. Those aged over 85 have more than a 33 percent chance of developing the disease in general. A study in the United States shows 47 percent of the population aged over 85 suffers from the disease.

Is there a specific type of person who is more susceptible to Alzheimer’s disease?

There is no research that has proven the direct cause of it - hereditary factors or diet, for instance. However, there are some studies about family history. If one of the parents has suffered from the disease, their children have double the chance of developing it as they get older.

Women are known to have a higher risk of developing the disease than men. But I presume that is because women live longer than men. There is also a theory that when you are severely stressed, the brain cells die and it could cause Alzheimer’s disease, but that has not been entirely confirmed.

In the case of vascular dementia, which makes up 30 to 40 percent of all types of dementia, the cause is conspicuous. It is caused when a person’s brain blood vessels are destroyed, thus destructing the brain cells around the vessels. Since the cause has been identified, the specific dementia is preventable. If you have a family history of vascular dementia, are obese or enjoy smoking and drinking alcohol, you may know in advance if you will develop the disease by taking a cerebral angiography.

What are the symptoms like? When your memory gets worse, does it mean you have developed the initial phase of the disease?

Forgetfulness and dementia are different in some ways. Even if you cannot remember exactly what you want to remember, if you can come up with the answer with a simple hint, then you may not have developed dementia. Forgetfulness is caused by a slow exchange of brain neurotransmitters, while dementia develops when some parts of your brain cells die. Forgetfulness is part of dementia’s symptoms, but it does not necessarily mean you have developed dementia. Symptoms of dementia include not only memory failure, but also abnormal language ability and behavior, and abrupt changes in one’s personality.

Would it be better if you began treatment as soon as possible?

Treatment with medication can even make full recovery possible, since drugs can help create new blood vessels around the destroyed blood vessels.

However, the story is different with Alzheimer’s disease. You cannot restore already destroyed brain cells. You can only slow the progress of the disease with drugs containing substances that prevent the dissolving of acetylcholine. Acetylcholine is a chemical compound that plays a critical synaptic role in the initial formation of memory.

A vaccine for Alzheimer’s disease is known to be is development.

At this moment, there is no perfect preventive measure against the disease. But we are expecting to see a promising vaccine now being clinically tested. The vaccine is meant to prevent activation of amyloid-beta, a kind of protein that is known to be the trigger of the disease.

It has been announced that the vaccine also eliminates the amyloid protein that has already accumulated in the brain. We predict the commercialization of the vaccine will come in five to six years. If you want to prevent vascular dementia, you need to quit smoking, drinking alcohol and work out regularly.