“Flower Series I” by Lim Ok-sang


Lim Ok-sang, who is known for politically-fueled paintings and public installation projects, is making a comeback following an eight-year hiatus after his last solo exhibition in 2002. Through his latest solo exhibition, entitled “Total Art,” he is showing 60 paintings, sculptures, installations and mixed media art at Gana Art Center in northern Seoul.

The artist is most recognized for works that addressed social injustice during the 1970s and 80s that became hugely influential in Korean society.

Commenting on Lim’s work, critic Lee Yong-woo said: “During the 1970s and 1980s, Lim’s work dealt with social events, human relations and political ideology. Through his early paintings, he appealed to the public by asking for their participation in resisting social injustice and suppression as well as in the renewal of society through innovation.”

This time around, Lim has broadened his scope to address issues related to the environment.

“I guess I’m getting older now,” Lim joked, when asked why he chose the environment as the main theme for his new solo exhibition. 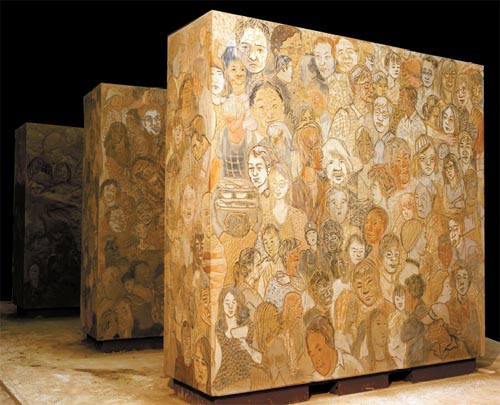 
He incorporates five elements - water, fire, iron, flesh and earth - into the works in this exhibition, which places restrained, lyrical artworks alongside more aggressive works with a political message.

His “Flower Series I,” an oil painting that hangs at the entrance of the gallery, sets colorful flower blossoms in red, white and purple against an abstract backdrop that features Lim’s characteristically bold yet intricate brush strokes.

“We should never lose purity of heart, especially when times are tough like at present,” Lim said. “These days, I wake up thinking I can live life like a beautiful flower.”

A highlight of the exhibition is the “Flesh and Soil” series of large, rectangular blocks, which the artist made by using untreated soil.

The artist explained that for him, the essence of soil and what it represents serve as the basis of his thoughts about the cycle of life.

“We come from soil and we die and are buried in soil,” he said. “It is the most adequate medium for me to express human life and its ultimate end.” 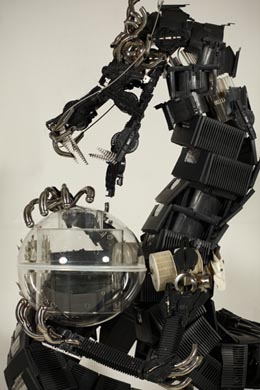 The blocks are covered with faces and bodies, some of famous people and others of Lim’s family and friends. Walking past the works, Lim said that he made sure that the soil was not chemically treated in any way so as not to alter its natural state.

“I do a lot of oil paintings but I often feel painting with oil is quite a closed off way of creating art,” he said. “Visitors can’t really touch it. But with these soil blocks, there is no artificial smell and viewers can touch or sit on them without destroying them.”

Lee notes that Lim “doesn’t use soil to create another material” but that “he treats soil as art to minimize his role as an artist.”

Although the eco-themed works represent a departure for the artist, the old Lim is also present, particularly in works such as “Medusa.”

As perhaps one of the loudest pieces of the exhibition, the installation, made of thin pieces of steel, depicts U.S. President Barack Obama and the late Osama bin Laden as Medusa. Divided by a horizontal, steel line, Obama’s face dominates the top half of the work while Osama bin Laden’s face is upside down on the bottom half.

“More than criticizing the U.S., I wanted to show that, in the end, Obama and Bin Laden, no matter what they represent, are both part of the dialogue of the real world at present. Obama is another face of Bin Laden and Bin Laden is another face of Obama,” Lim said. “It’s the same with you and me. We are different but live under a common thread of existence that ultimately shapes how the world functions.”

*The “Total Art” exhibition runs until Sept. 18 at the Gana Art Center in Pyeongchang-dong, northern Seoul. Hours are from 10 a.m. to 7 p.m. Monday through Sunday. For more information, call (02) 720-1020 or visit www.ganaart.com.