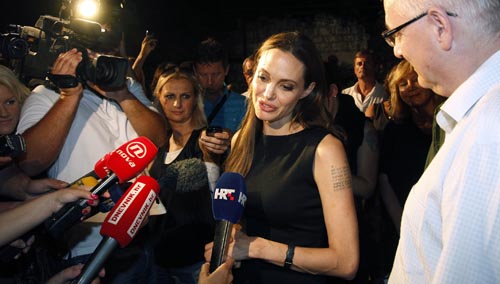 LOS ANGELES - Angelina Jolie has dismissed ongoing speculation about marriage and more kids with her partner Brad Pitt, telling Vanity Fair in an interview published on Tuesday that there are “no secret wedding plans.”

The Oscar-winning actress revealed details of her upcoming wartime romance film, “In the Land of Blood and Honey,” which she directed. She told Vanity Fair magazine that she feared stepping behind the camera for the first time.

“I’ve never felt more exposed. My whole career, I’ve hidden behind other people’s words,” Jolie said. “Now it’s me talking. You feel ridiculous when you get something wrong.”

The actress, who penned the script during a two-day quarantine period when she had the flu, said she had Pitt read it over first. “He called and said, ‘You know, honey, it’s not that bad,’” Jolie told the magazine.

The story follows a couple’s love affair during the Bosnian war, and Jolie made sure to get the script as accurate as possible by sending it to reporters and writers of Serbian and Bosnian nationalities who had experienced the war.

But the movie did cause controversy last year when the leader of a women’s group in Sarajevo urged city officials to ban shooting the film in Bosnia. She complained that the love story was offensive because it was between a Bosnian woman and a Serbian man.

At the time, Jolie said she hoped people would withhold any judgment until they had seen the film, which is expected to hit theaters in December of this year.

The “Salt” actress told Vanity Fair that she took the helm as director because the script “was something I didn’t trust out of my hands.” And she revealed how directing the film changed the way she perceived acting.

Jolie cast many unknown actors in the film, which she felt was important for authenticity.

“It couldn’t be anyone else. It’s their story. It was important that they were willing to do it. If none of them were willing, I wouldn’t have made it,” said the actress.