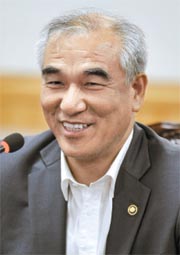 Minister of Culture, Sports and Tourism-designate Choe Kwang-sik said yesterday that he would promote Korean culture around the world as a long-time expert in the field.

The current head of the state-run Cultural Heritage Administration organized a press conference at the National Palace Museum of Korea in Gyeongbok Palace less than a day after being appointed by President Lee Myung-bak in a cabinet shuffle.

He is set to replace Choung Byoung-gug.

“I had vague hopes that Korea’s artistic arena would prosper but never imagined that I would become culture minister,” said the 58-year-old appointee, adding that he was notified of the Blue House decision on Monday.

“How to harmonize a variety of fields - culture, sports, religion, national public relations - is crucial. I will try to create a comprehensive synergy effect.”

As an example, he mentioned the World Athletics Championships in Daegu currently underway and the concurrent Gyeongju World Culture Expo being held in the neighboring city.

Choe, a graduate of Korea University where he has also served as a history professor since 1995, noted that the idea of hosting last year’s G-20 Summit dinner reception at the National Museum of Korea came from him. He was director of the government-run museum at the time.

“Although issues of top priority at the G-20 Summit last year were economy and currency, the reception was a golden opportunity to let the world know about Korean culture,” he said.

“U.S. President Obama said after the reception that he was amazed to know that Korean culture was so unique.”

Choe also said that he hoped to expand the Culture Ministry’s budget for next year. While OECD member countries allocate between 2 to 3 percent to their culture ministries, Korea spends just 1.1 percent. He said that the initial target will be 1.5 percent and that he wanted to gradually raise the figure.