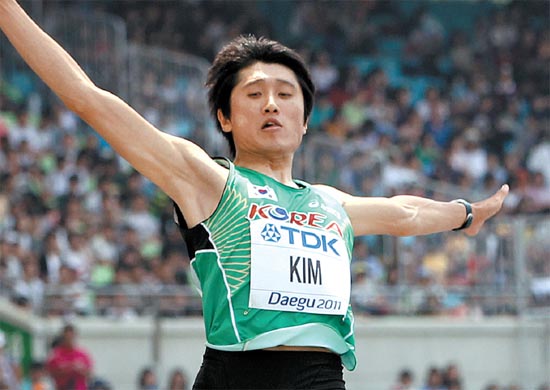 Kim Deok-hyeon makes his jump during the qualification round for the long jump at the World Championships in Athletics in Daegu yesterday. [JoongAng Ilbo]


DAEGU - Kim Deok-hyeon yesterday became the first Korean to qualify for the long jump final at the World Championships in Athletics, while his compatriots in other events were knocked out early.

Kim, considered Korea’s best hope for a top-10 finish, was 11th best in the qualification at 8.02 meters. The top 12 jumpers, or those who cleared at least 8.15 meters, reached the next round.

Kim, mostly a triple jumper, is taking on the long jump for the first time this year.

He reached 7.86 meters on his first attempt, went 7.99 meters on his second and ended his qualification round at 8.02 meters. He holds the Korean record of 8.20 meters.

“It was a close call, and it feels great,” said Kim, who missed the final at the 2009 championships in Berlin by 2 centimeters.

“I expected other jumpers to struggle a bit, and I felt 8.05 meters would be the cut-off line.” 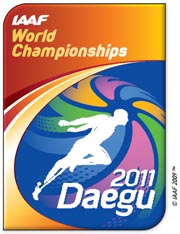 The final is scheduled for tonight at 7:20 p.m. Kim will also compete in the triple jump earlier in the day.

“Since I have to do the triple jump in the morning, I may not be in top shape for the long jump,” Kim said. “My record in the final may not be as good as today, but I will try my best.”

Meanwhile, the men’s 4x400-meter relay team set a new national record of 3 minutes, 4.05 seconds yesterday, but the team of Park Bong-go, Lim Chan-ho, Lee Jun and Seong Hyeok-je still ranked last in their heat of eight teams and was eliminated.

It was the second Korean record at these championships, followed by Kim Kun-woo’s achievement in the decathlon.

Good news also came for South African double-amputee runner Oscar Pistorius in the same relay when he anchored the team to secure its berth at the final.

Kim Kyung-ae came up short of reaching the final in the women’s javelin throw. The best she could muster was 54.96 meters, 27th in a field of 28. The qualifying mark was 61 meters.

In the women’s high jump, Han Da-rye exited early when she failed to clear 1.80 meters in three successive attempts.