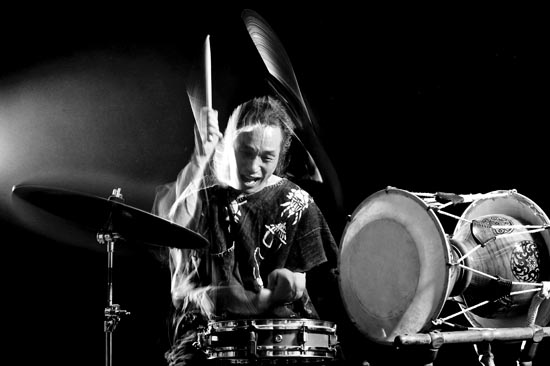 Park Je-chun, 50, has been playing the Korean janggu (drum) and Western drums for 30 years. He is now presenting a performance called “Korean Grip” at the Seoul Namsan Traditional Theater on weekends to show how Korean rhythms can be adapted to Western instruments. By Kwon Hyuk-jae


At a small theater in Hongdae, western Seoul, 10 performers sit in a circle with jazz instruments. Each one plays spontaneously, with no orchestration linking the group. Every so often, when the musical rhythms get stuck in a funk, several dancers jump onstage to add more frenetic energy to the avant-garde performance.

Called “Gosupuri,” this unusual show has been taking place every two months in front of an audience at the Post Theater since jazz musician Park Je-chun launched it in February.

The 50-year-old named the performance after the Korean words for drummer (gosu) and a generic suffix indicating a performing method (puri).

As it proved a little too complex for the audience to grasp, Park prepared another performance called “Korean Grip” at the Seoul Namsan Traditional Theater to provide a softer introduction to his musical methodology.

He said he wants to highlight how versatile music is and show how easily it can transcend barriers - geographical or otherwise - by playing Korean rhythms with Western musical instruments, and vice versa.

“I’ve been practicing how to play drums and especially the janggu [a double-headed Korean traditional drum] for more than 30 years,” he said. “I spent years wondering how best to combine the two. Finally, I decided to study ways of playing Western musical instruments, such as the piano or the drums, in accordance with Korea’s indigenous musical rhythms.”

He said little changes can make a big difference, such as using the grip needed to play Korean instruments and migrating it over to its Western counterpart.

This, he said, takes other people’s attempts to fuse musical styles from the two hemispheres to another level by making the points of intersection deeper. It also creates a greater sense of harmony than just playing the two instruments side by side, he added. Park calls his new method, simply, “Korean Grip,” after which the stage show is named.

In order to feed his appetite for information about traditional Korean music, Park has traveled the breadth of the country to study from various masters.

After he was discharged from the military - when his beloved janggu rarely left his side - he went to Jindo in South Jeolla and lived with a shaman for a year. There, he studied and performed exorcism rituals and found a way to weave this into his music.

“Even though I learned about Korean traditional rhythms such as pansori [narrative singing], I was still eager to learn more,” said Park. “It struck me that the origin of Korean sounds could be found in shamanistic rituals, so I went to see a shaman and really developed my musical spirit.”

Earlier this year, he thought the time had finally come to show people what he had learned: how to mix the traditional and the modern in a fashionable way.

“‘Gosupuri’ is not really for a broad public audience,” he said. “It’s avant-garde, so I don’t really need to try too hard to make people understand it.

“But ‘Korean Grip’ is different. I dream of the day when world-renowned percussionists are aware of Korea’s own rhythms and our words for these, such as gutguri and jajinmori.”

“Korean Grip” represents a new, fifth approach to the accepted ways of playing the drums.

The two main methods in use today are traditional, which is popular in jazz music (left hand is slightly turned counter-clockwise) and matched, used mostly in pop (both hands with thumbs on top).

Previously, people thought that a crossover could not be made with the Korean style as it involves hitting the janggu on its wooden edges. But Park is setting out to show the world that it can be done and that Western drums can make the same sound and echo.

His specially tailored grip requires that both index fingers lay along the stick. When the drum is struck, the fingers stay pressed down to stop the sound of the drum’s resonance.

To show how this can produce harmonious sounds on Western drums, Park invited pansori singers and players of the haegeum (a Korean string instrument that resembles a fiddle) to perform.