Soldana is dead on in Besson’s silly, sexy ‘Colombiana’

Soldana is dead on in Besson’s silly, sexy ‘Colombiana’ 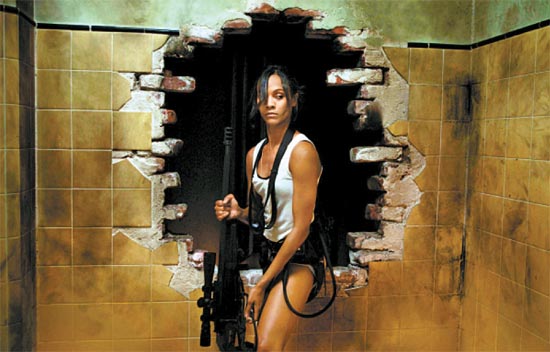 In “Columbiana,” the new film by Luc Besson, Zoe Saldana plays Cataleya, who saw her parents killed in front of her when she was 9 years old and becomes a professional assassin 15 years later to avenge her parents’ death. Provided by Daisy Entertainment


A brawny B-action picture with a gorgeous, graceful woman wreaking havoc at its center: yup, “Colombiana” is a Luc Besson movie.

The director of “La Femme Nikita” and “The Fifth Element” serves as co-writer and producer here, but this is very much a spin-off of his brand, a continuation of the kind of stereotype- and gravity-defying characters he’s made his name on.

“Colombiana” feels more hammy and muscular, though - but knowingly so, and that’s what makes it solid, late-summer escapist fun.

Zoe Saldana stars as Cataleya, who saw her parents killed in front of her when she was just a 9-year-old schoolgirl living in the slums of Bogota, Colombia.

Played as a child by the intense Amandla Stenberg in her film debut, she escapes by performing a dizzying series of parkour moves across rooftops and through windows before making her way to the U.S. Embassy to vomit up the microchip her father entrusted with her.

No, the film from French director Olivier Megaton (“Transporter 3”) is not subtle. As the production notes so helpfully inform us, Megaton “takes his name from his birthday: the 6th of August 1965 is the 20th anniversary of the dropping of the Hiroshima A-bomb.” But certainly you weren’t looking for that, now, were you?

Anyway, 15 years later, with the help of her Uncle Emilio (Cliff Curtis), Cataleya has become a highly efficient professional assassin, but she still seeks revenge against the drug kingpin (Beto Benites) and his right-hand man (Jordi Molla) who are responsible for her parents’ deaths. The mark she leaves on her victims’ bodies - a drawing of the orchid she’s named for - is a message for her childhood enemies but it also sparks the curiosity of an FBI agent who thinks he’s tracking a serial killer. (Lennie James serves as the film’s lone source of dignity and calm in the role.)

Over-the-top bad guys spew generically menacing lines and hot women parade around in bikinis and lingerie. The catlike Saldana herself kicks butt in little more than tank tops and short-shorts, and prowls around during a thrilling jail hit in the kind of skin-tight body suit she might have worn to do motion-capture work for “Avatar.” Her character also likes to suck lollipops while she’s cleaning out her guns; again, subtle.

The action, meanwhile, is totally preposterous, but that’s what you pay your money to see. Cataleya seems to be both omniscient and omnipresent, capable of arming or disarming any device, adept at crawling through or climbing over any obstacle in her path without ever smudging her sexy eyeliner. In fact, there’s only one scene where she seems to be in any real danger: a visceral, bruising sequence of hand-to-hand combat featuring towels and toothbrushes reminiscent of the third “Bourne” movie.

For the most part, it’s all big and silly, but at least it’s enjoyably staged and crafted.

Saldana also manages to earn our sympathy, as the script (which Besson wrote with frequent collaborator Robert Mark Kamen) allows her to convey a surprising amount of emotion and inner conflict. Cataleya’s purely physical relationship with a hunky artist named Danny (Michael Vartan) forces her to confront the loneliness she’s long suppressed.

But then it’s time for her to take her clothes off again.

It opened in Korea on Wednesday at theaters nationwide.