Super Junior singer off to the Army

Super Junior singer off to the Army 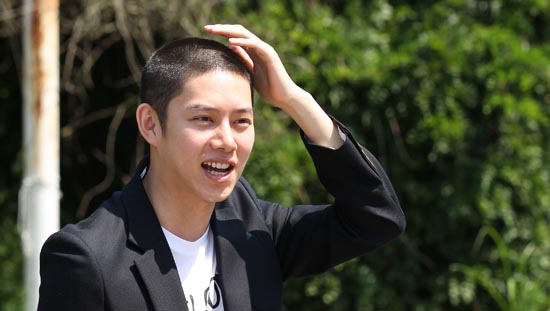 Super Junior’s Kim Hee-chul said goodbye to hundreds of fans at the Nonsan Army Recruit Training Center in Chungnam before enlisting in the Army yesterday.

“I promise that I will come back as a mature person,” said the 28-year-old singer, who was sporting his new military-ready haircut.

Kim will go through four weeks of basic military training, after which he will serve in noncombat operations for 23 months.

A huge crowd of fans and the media gathered yesterday in front of the training camp to see Kim off. Some were holding banners wishing Kim good health and a successful return to the entertainment industry at the end of his service. Some fans had flown in from as far away as China.

Meanwhile, Kim publicly said good-bye to his fans on a music TV show that aired on Aug. 28.

“I’d like to thank my fellow Super Junior members,” Kim said. “And thanks to the managers and staff for putting up with me. I also want to thank all my fans.”

Kim made his remarks after he and his band mates accepted the show’s award for best song of the week for “Mr. Simple,” from the album of the same name.

Kim had been expected to enlist in the Army next year because the band had only recently released its fifth album, “Mr. Simple,” but Kim and his agency SM Entertainment announced in mid-August that he would leave the group to fulfill his mandatory military service.

In addition to being a member of Super Junior, Kim had also worked as a host for many TV shows including MBC’s “Radio Star.”