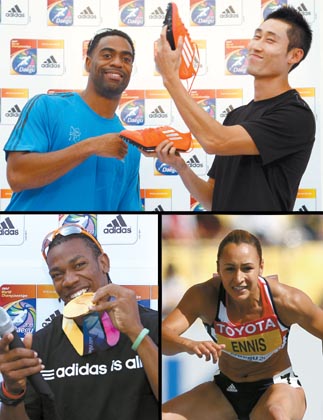 Some of the athletes sponsored by adidas. Clockwise from top: Tyson Gay (left), Jessica Ennis and Yohan Blake.

The official sponsor of the International Association of Athletics Federations (IAAF) until 2019, adidas, enjoyed great success at the IAAF World Championships Daegu 2011. The company supplied uniforms to 12 countries and is sponsoring 1,000 athletes. It is also supplying supporting equipment to 7,300 volunteers. It has already set up a media center and is hosting press conferences for the athletes and exposing itself to the media. It is not wrong to say that Daegu Stadium is surrounded by adidas.

Zion Armstrong, adidas Korea CEO, said “adidas is the official partner of IAAF and adidas is all in with passion for this event,” about the partnership between the two.

The 100 meters is arguably the highlight of the entire Worlds but adidas didn’t have great expectations of having one of its athletes winning until Usain Bolt was disqualified. Yohan Blake took advantage and presented an unexpected gift to adidas by winning the event.

Yohan Blake wore ‘adidas-adizero prime’ running shoes and so adidas is now promoting them as ‘the world’s fastest running shoes.’

The shoes were developed by the adidas innovation team and presented a new standard in running shoe, with these weighing an astonishing 99 grams. Every part of the shoe, from the plate, spike, leather upper and even the shoe laces were newly designed and created by the innovation item. The new SPRINTFRAME platform of the adizero prime is two times stiffer and only half as thick (1.3 mm) as standard sprint plates which allows the runner to be closer to the ground while at the same time improving stability. Also, new reinforced carbon nanotube technology means that energy usually lost during races will be minimized.

The six permanent nano-ceramic compression pins, an adidas patented design, are positioned to minimize braking forces and support greater propulsive impulse for accrued speed. The pins attached to the shoe will make the feet become more closer to the ground, increasing the stability, power and speed with each step.

The upper leather has improved the comfort level of the shoes and it has been said that it feels like you are wearing no shoes at all whilst providing extra stability while running and jumping.

Adidas Korea commented on the new shoes saying: “It is a shoe that contributed greatly to Blake winning the race with a time of 9.92 seconds and we expect it to cause a sensation.”

Other athletes sponsored by adidas are also providing joy to their sponsor by succeeding at the Worlds in Daegu.

Another athlete that adidas is sponsoring is Jessica Ennis. The British athlete finished the heptathlon in second place, receiving a silver medal. She was leading until the long jump but in the end settled for the silver. Jessica, however, was not defeated, saying “I have a new goal to work on. At the 2012 London Olympics, which will be held in my home country, I will definitely win and exceed 7,000 points.”

At the IAAF World Championships Daegu 2011 adidas was a winner both in terms of marketing and with how many medals adidas sponsored athletes won.

Before the World Championships kicked off, adidas held an ‘adidas all in’ festival in front of the adidas shop at Dongseong-ro in Daegu.

With a crowd of over 2,000 people, adidas presented various performances with the theme ‘adidas is all in with passion’ sharing the brand’s message with the people of Daegu.

The adidas marketing parade was the best among the sports brands among its competitors.