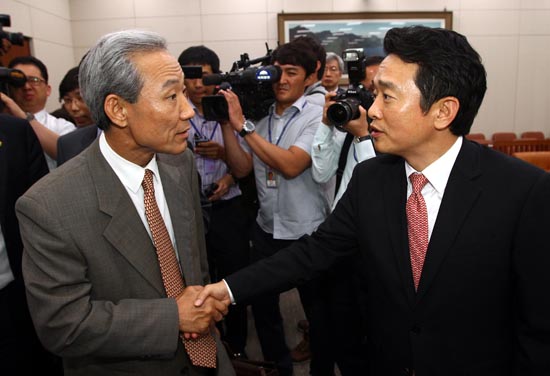 
The ruling and opposition parties agreed yesterday to delay introducing the Korea-U.S. Free Trade Agreement ratification bill until ratification of the pact in the U.S. becomes more certain, avoiding - or at least delaying - an expected parliamentary scuffle and raising hopes for more bipartisan compromise on the pact.

The ruling Grand National Party initially planned to submit the bill to the National Assembly’s Foreign Affairs, Trade and Unification Committee on Wednesday, the first step for parliamentary approval of the deal. It delayed the move to yesterday amid strong opposition from the opposition Democratic Party.

Then, the parties agreed to a longer delay.

“There was general agreement that the bill would be submitted when it becomes clear that the U.S. would submit its bill to Congress,” said Yoo Ki-june, a GNP lawmaker.

Kim Dong-cheol, who represents DP members on the committee, said the DP approves of the timing but still has problems with the bill.

The GNP had hoped to start the parliamentary approval process on the bill to meet its target of ratifying it by October but opposition parties accused it of trying to railroad an unbalanced agreement that would harm many Korean industries.

They hinted at using physical force to block the GNP’s submission of the bill to the standing committee, raising the possibility of the kind of physical brawl for which the National Assembly is infamous.

All parties are trying to avoid brawls because the public has become disgusted with them.

Committee chair Nam Kyung-pil, a GNP lawmaker, said yesterday he will make a judgment on when the U.S. bill is close enough to ratification after consulting with representatives of all parties on the committee.

Nam said he expects that the bill can go to the committee around Sept. 20. He is scheduled to visit the U.S. after the Chuseok holiday with representatives of the ruling and opposition parties.

The trade pact, signed in June 2007 and supplemented in December last year, has yet to be introduced in the U.S. Congress.

According to diplomatic sources, the U.S. Congress is planning to pass the deals in October, not this month.