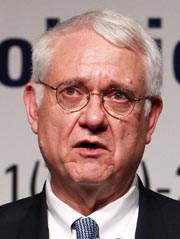 The United States is ready to fight a war against North Korea if necessary, the head of the Center for Strategic and International Studies said at a Seoul forum yesterday.

“If we have to fight a war, we will,” said John Hamre, whose organization is based in the United States. “We won’t start it, but we will win if it happens.”

“This is a completely failed regime that can do only one thing well - try to intimidate its neighbors,” Hamre said. “The North will either collapse or dissolve. It will not win. That is certain.”

The few countries that support North Korea are paying “an astounding price,” he said in his keynote address.

China’s motive in supporting the North, Hamre said, was to prevent havoc along its border with North Korea in the event of the North’s sudden collapse.

“[China] has a greater risk in North Korea’s instability [and] collapse than it has in building a nuclear weapon,” Hamre said. “They believe that if North Korea were forced to abandon its nuclear power, the North Korean government would collapse. It would be chaos on the border, and they don’t want that.”

Hamre explained that China had decided to stand by North Korea in the near term, as seen by China’s decision last year to side with the North after the sinking of the Cheonan. The choice had been “a painful dilemma” for China, he said.

The head of the CSIS also broached the recent territorial disputes between South Korea and Japan over the Dokdo islets and the name of the Sea of Japan, which Seoul maintains should be called the East Sea.

“From a rational point, both countries would benefit from greater cooperation,” said Hamre, subtly nudging the two countries to move past their history. “That would be in everyone’s interest.”

Hamre also addressed the recent budget cuts in the United States, saying that despite cuts in defense spending in the near future, the Korean Peninsula would be a “top priority.”

The forum, attended by experts from nearly a dozen countries, ends today.

Minister of Unification Hyun In-taek’s address was given by his vice minister, Um Jong-sik, in the aftermath of this week’s cabinet reshuffle in which Hyun was replaced.