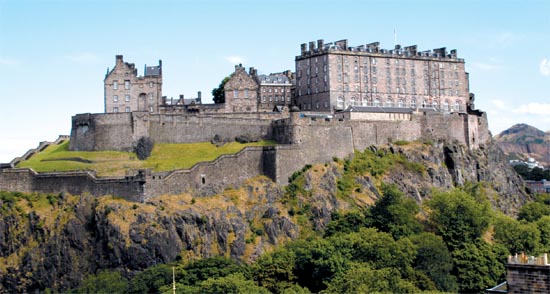 
Edinburgh ― The Fringe Festival in Edinburgh wrapped up on Monday, but there is still plenty to do in the capital city of Scotland. Most of the 1 million people that came for the festival are long gone, leaving plenty of space for the city’s almost half a million people and tourists to explore the calm, quite true nature of the city.

About five hours north of London by train, Edinburgh offers unique experiences: the weather is even worse than London; the sound of bagpipes resonates down Princes Street, the city’s main street which seems to divide new and old; Scotland is the home of golf; it’s also home to Scotch whisky (there are around 70 distilleries in Scotland). It is also a country where men wear skirts (with no underwear). Then there’s the famous haggis - a traditional Scottish dish. You haven’t lived until you’ve eaten minced sheep heart, liver and lungs that have been simmered in the animal’s stomach.

Edinburgh itself is quite small - less than half the size of Seoul - which is a bonus for tourists on foot as most of what you want to see is in walking distance. On the Royal Mile, which dissects the city from west to east, you’ll find the city’s landmark Edinburgh Castle on the far west end and Holyrood Palace at the other end. From castle to palace is about a 30 minute walk.

And if you want to stay dry, don’t leave home without an umbrella. The weather here is quite capricious. 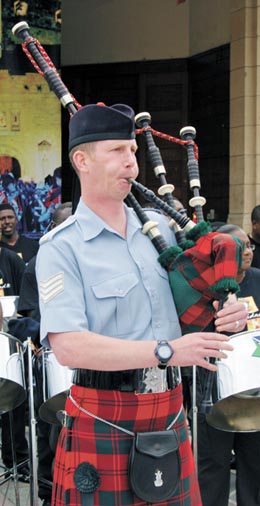 A man in a Scottish kilt plays the bagpipes. Provided by Edingburgh Brand

Scotland, a country with about 5 million people, was an independent sovereign state until 1707 when it entered into a political union with England to form the united Kingdom of Great Britain. James VI of Scotland succeeded to the English and Irish thrones in 1603 and Scotland entered into a personal union with England and Ireland but it wasn’t until 1707 that the Kingdom of Great Britain was created (a forerunner to the current United Kingdom). Since James VI is a descendent of the current royal family, Edinburgh Castle and Holyrood Palace keep traces of James I and his mother Mary, Queen of Scots, within its buildings. Even the room where James I was born is marked in Edinburgh Castle.

Built on top of volcanic rocks, the castle-turned-fortress dominates the skyline of the city of Edinburgh. It was used as the royal residence until the 1603 Union of the Crowns.

Since the castle sits atop an extinct volcanic plug, it is a good idea to go to the top first to get a good view of the entire city before making your way down. At the top you can find the Crown Room in the Royal Palace, where the Stone of Scone, upon which Scottish monarchs had been traditionally crowned, is kept. It was returned to Scotland in 1996 after it was taken by Edward I of England (1239-1307).

If anyone wants try on a kilt at the castle, it is highly recommended to keep your underwear on. It’s quite windy up there.

Holyrood Palace is the place to be if you’re more interested in royal history. Holyrood Palace, still in use by the British royal family, is open to the public when the royals are out of town. In the Great Gallery, the queen hosts royal events during her annual visit. It is surrounded by portraits of Scotland’s kings.

But why the French interior? Mary, Queen of Scots (1542-1587), daughter of King James V of Scotland, was raised in France by her French mother until she was widowed in 1560 by Francis II and returned to Scotland. When she found her home in Holyrood Palace, she tried to recreate the French renaissance style in her rooms. In the center of the room, the glassware, accessories and stationary she used are still displayed.

A rich history exists in this palace, so it is highly recommended to take the free audio guide at the entrance. 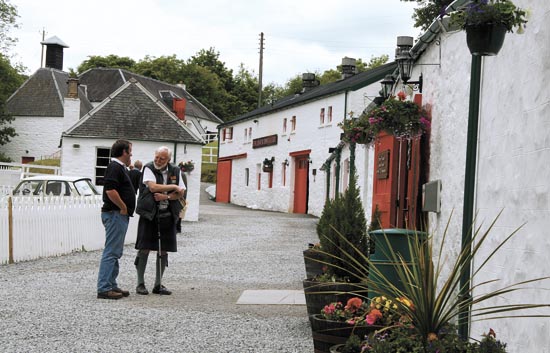 A man takes a tour of the Edradour whisky distillery. Provided by Signatory Vintage Scotch Whisky

The Scotch whisky industry is estimated to be worth almost 4 billion pounds ($6.5 billion), so it’s an important chunk of the economy. Putting it into perspective, the tourism industry brings in 5 billion pounds annually. There are about six dozen distilleries in operation.

“Scotland is a naturally resourceful country. The water we have, the frequent rain we have, makes it possible to make marvelous, top-notch whisky and many other products we are proud of,” said Fiona Hyslop, cabinet secretary for Culture and External Affairs at the press briefing for the Edinburgh festivals on Aug. 19 at the University of Edinburgh.

From left: Whisky ferments in oak barrels for 30 years at Edradour. By Lee Sun-min
Scotland is also famous for its cashmere. Provided by Todd and Duncan

Clean and fresh water helps to make another product that Scotland is well known for - cashmere. It’s known as the smoothest fiber in the world.

The secret to the milling process makes Scottish cashmere luxurious and popular in high-end markets around the world.

If you go to Scotland expecting standard British food, you are in for a surprise.

Not content with a rich history, Scotland also boasts a wide selection of high-quality food products. The ost widely known traditional food in Scotland is haggis.

The ingredients in haggis mean that visitors to the country are often weary of trying it but many tourists have been converted to the delights of haggis after plucking up the courage to tuck in.

Haggis, a dish distantly related to the sausage, can often be found served at breakfast with eggs, bacon, mushrooms and tattie scones or oatcakes. More commonly haggis is eaten with “neeps and tatties” (swede or rutabaga and mashed potatoes)

Another food item one should try is a dish called cranachan. Served in a tall glass, cranachan is a mixture of whipped cream, whisky and fresh raspberries that can be soaked in various things like honey. It’s delightful. Whipped cream covers the raspberries and the top is dusted with toasted oatmeal. Depending on your personal taste, it is served either with or without the whisky. 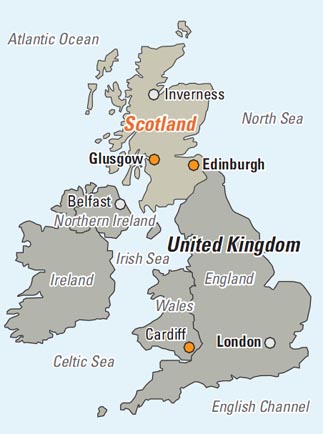 Glasgow is the largest and most industrialized city in Scotland and the third-largest city in the United Kingdom after London and Birmingham. It’s about an hour west of Edinburgh by train.

Since it has been known as a trading and commercial hub of the U.K. since the 18th century, it’s not as popular with tourists compared to Edinburgh.

But there’s much to do here. Get a feel for the academic history by visiting the University of Glasgow, where the famous economist Adam Smith studied.

When I was there, Brad Pitt was shooting a movie in Glasgow - the zombie thriller “World War Z.” For the movie, parts of the city have been transformed to resemble Philadelphia in the United States.

The city is scheduled to host another major Hollywood production in mid-September called “Cloud Atlas,” which will star Oscar winners Tom Hanks and Susan Sarandon.

*For more information on Edinburgh and other cities in Scotland, go to www.edinburgh.org, or www.visitscotland.com.