Knowing where you come from

Knowing where you come from 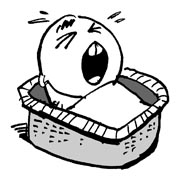 Zhuangxing was a prince of the state of Qin, but he was sent to Zhao as a hostage. There, he fell in love with a concubine of a rich merchant named Lu Buwei. Zhuangxing asked to take her as his wife. Lu Buwei was a strategist by nature, and he decided to concede the woman to better his future. Zhuangxing married the woman, and they had a boy. The son grew up to become one of the greatest rulers in China, Qin Shi Huang. However, it is not clear whether his biological father is Zhuangxing or Lu Buwei. According to the Records of the Grand Historian by Sima Qian, the concubine of Lu Buwei was already pregnant when she married Zhuangxing, and therefore, Qin Shi Huang was Lu Buwei’s son. An illegitimate child from a Zhao merchant became the first emperor of the Qin Dynasty and unified China for the first time.

But the Virgin Mary kept secret Gabriel’s annunciation that she would conceive her son miraculously by the agency of the Holy Spirit. When the baby was born, she listened to the message of the angel delivered by the shepherds of Bethlehem. She was afraid that she would be persecuted. Even non-Christians know the story behind the birth of Jesus. When did Jesus himself find out? We all wonder about when Jesus asked about his father, and how Mary explained to him the holy conception.

It is most frustrating to not know your roots. You may not love your biological parents, but you would be curious to know who they are. The course of finding out is bound to be dramatic, and it is a favorite plotline for television dramas and films. Korean-American director Jennifer Yuh Nelson unfolds the story of Po, a giant panda, who learns about his birth and how he came to be raised by Mr. Ping, a goose.

Steve Jobs, too, harbored a secret about his birth. He spoke about his family in a commencement speech at Stanford University in 2005. His biological parents met when they were graduate students. However, the father of the biological mother opposed the union, and the mother went to San Francisco and put up her son for adoption. A few years later, the father passed away and the two got married, only to get divorced four years later. The biological father turned 80 this year, and he found out that Steve Jobs was his biological son in 2005. He sent e-mails to Jobs, but his approach was not welcomed. He said that he would like to have a cup of coffee with his son. Steve Jobs, who has been battling pancreatic cancer since 2004, has announced his resignation from Apple.