The trio that brought 3-D to LG

The trio that brought 3-D to LG 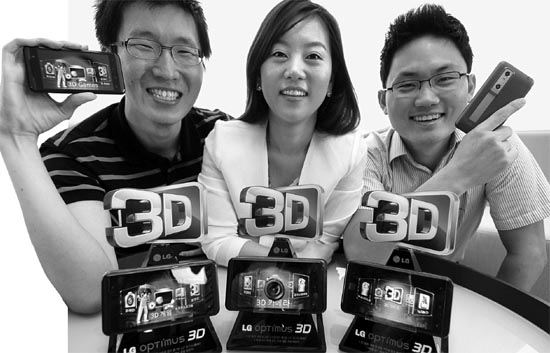 (From left) Ha Rae-joo, Sohn Su-yeon and Roh Hyeon-woo pose with the 3-D smartphones they developed. By Han Eun-hwa


Late last year, a pair of Koreans paid a visit to the YouTube research center in London.

What they brought with them impressed researchers a lot. And that was the prelude to the birth of a new-concept mobile device that many are pinning their hopes on.

They were a team of engineers from LG Electronics, the world’s No. 3 maker of mobile phones, who were tasked with developing the Optimus 3-D smartphone, the company’s newest smartphone with 3-D capabilities.

The engineers - Roh Hyeon-woo and Ha Rae-joo - visited YouTube to convince the U.S. video-sharing service to add a 3-D content section to its site.

And the phone they took with them was a prototype of the Optimus 3-D, because the model wasn’t released until this summer.

“We arranged a meeting with YouTube and flew to the U.K. as soon as the device was ready,” Roh recollected. He said the Google-owned company wasn’t that fascinated when they heard the idea by long distance, but that changed when researchers saw the Optimus 3-D smartphone in action.

“We worked with them for the following five days, listening to their demands and discussing them on the spot,” Roh said. Not long after, the two companies announced a partnership and YouTube launched a 3-D video channel that supports uploads from mobile devices. 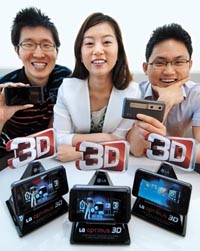 Optimus 3-D is a smartphone that works on Google’s Android operating system and it can capture 3-D content and deliver it without glasses.

And the device wouldn’t be what it is today if it weren’t for the so-called Optimus trio: Roh from the mobile phone research division, Ha from the software platform research unit and Sohn Su-yeon from the content service division.

Since August of last year, they had their eye on one thing: a smartphone that is different, innovative and fun. And ideas were their forte.

In March of this year, Ha showed his team members the technology that automatically converts 2-D to 3-D. Roh and Sohn were amazed: a football match created in 2-D was being played in 3-D. The team named the technology “HRZ engine,” after Ha’s initials.

A lack of 3-D content has long been pinpointed as the reason 3-D devices will have limited success. LG’s technology could ease those concerns.

The trio - especially Sohn, who was in charge of content - spent a substantial amount of time abroad convincing global content developers to roll out 3-D services for the device.

“I visited the Indian office of Gameloft, and stubbornly persuaded them,” Sohn reminisced. “We ended up spending the following month, making a 3-D game together.”

That is how the Optimus 3-D smartphone is preloaded with 3-D golf, car racing and shooting games.

The device first debuted in the world at the Mobile World Congress in Barcelona, Spain, last February, and industry officials flocked to the LG booth to get a glimpse of it, the trio said. They say they were given the freedom to experiment with their wildest idea - which is rarely the case at large conglomerates with their bureaucratic cultures - and that is how the Optimus 3-D was born.

Encouraged and feeling more confident than ever, the trio is looking forward to their next mission.