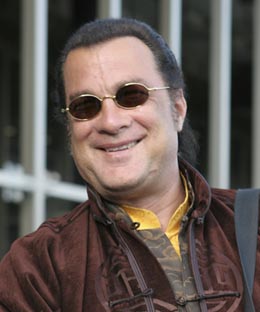 PHOENIX - Maricopa County Sheriff Joe Arpaio and actor Steven Seagal deny accusations by a U.S. man and his lawyer that a family dog was killed during a raid for Seagal’s reality TV show.

The sheriff’s office said in a news release the allegation is without merit. Seagal added he’s outraged.

The action-movie actor was participating in the raid as a special deputy sheriff for his show “Steven Seagal Lawman” on the A&E cable channel. His movie credits include “Under Siege,” “Above the Law” and “Fire Down Below.”

Seagal and numerous deputies and posse members were present March 9 during a raid at the home of Jesus Llovera. In the claim, Llovera says an 11-month-old puppy was killed along with 100 roosters.

According to witnesses at the raid, a dog was present on Llovera’s property when deputies and SWAT team members, including Seagal, entered the premises with a search warrant to arrest Llovera on cockfighting charges and seize all evidence pertaining to the crime.

Arpaio said there’s no evidence to back the claim that his officers killed a dog. “If my deputies, or posse man Seagal for that matter, had done something so awful like shooting a family dog, then where are the photos to prove it?” Arpaio asked.

Llovera’s attorney, Robert Campos, told The Associated Press Friday his client didn’t accuse Steven Seagal of killing an animal on his property in a notice of claim filed against the sheriff’s office.

“My client never accused Seagal of having anything to do with the death of his puppy,” Campos said. “He [Llovera] just wanted an apology from Seagal for his role in the destruction of my client’s home, property and animals.”

Llovera is seeking $25,000 against the sheriff’s office for humiliation, emotional distress and property damage.