A culture in flux captured for a global readership

A culture in flux captured for a global readership

The excerpt from ofK magazine at above left is from the inaugural issue from April of this year. It shows an 18-piece amulet by Eom Changyong (2008), engraved on juniper tree and painted with cinnabar, that is designed to ward off bad luck, bring good luck and make wishes come true. The page shown above right is also from the same issue. Shown at left are the covers of the first two issues of the magazine: “Aging” (June 2011) and “Gi” (April 2011). Provided by ofK Magazine


Thanks to a thriving network of talented writers and artists, expats now have a selection of magazines offering in-depth information on what’s going on in Korea. Local magazines Groove, 10, Seoul and Busan Haps all feature stories on a broad range of current and community events from music and travel to social issues and the arts.

Added to this lively mix is a new group of magazines that seeks to illuminate the finer points of Korean culture for a growing global community that has been inspired by Korean dramas, music and films.

The magazines ofK and ROKing Korea delve into aspects of traditional culture that are referenced in popular culture but not always explained, such as signs and symbols, folklore and philosophy - providing an insider’s perspective on cultural traditions and social trends.

The two magazines publish their content in both Korean and English and are distributed to locations in Korea and abroad.

Together, the three magazines are attempting to capture a culture in flux.

As An Nam-young, a Korean who works in the visual communication department at Fabrica, Benetton Group’s communication research center, said: “What comprises culture is how local people in certain cultures eat, sing, think and express themselves, including the clothes they wear,” An said. “And as elements from other cultures enter Korea, the culture has begun to grow beyond hanbok [traditional Korean clothing] and kimchi.” 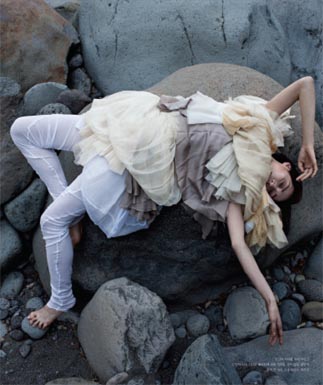 Calling itself a “magazine of Korean culture,” ofK attempts to give readers an experience of Korea that is at once visual, tactile and verbal in a package whose strength lies in its design.

The magazine’s publisher and founder, Park Yong-joon, who used to work in fashion photography, strongly believes in vivid presentation as a means of capturing readers.

“Magazines are not books,” Park said. “Not many people read magazines from cover to cover and most of them just flip through the pages and look for something that will catch their eye. That’s why we wanted to have striking photos and a well-considered layout to make the magazine stand out.”

ofK’s philosophy is explained in the opening article of its first edition.

“We have the present only because of the past, and the significance of the past is constantly reinterpreted by the present,” the article said. “This is why we have to incorporate both the present and the past when we talk about Korean culture.”

Published in April, the first issue was dedicated to the concept of gi, or force, and this theme is carried throughout. In addition to the feature story, there are articles on B-boying and bullfighting and the role that the flow of energy plays in these activities.

Leading into the feature story is an article about bujeok, or amulets, and the story’s arresting visual design imbues it with the look and feel of museum-quality art. The story is printed on a mix of glossy magazine paper and something resembling hanji, traditional Korean paper, that feels handmade to the touch. 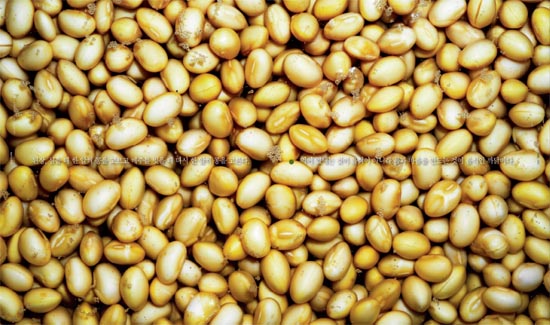 Defined in the article as “a parchment of paper with writings, drawings and/or symbols meant to ward off bad spirits or bring good luck,” bujeok are small in size and usually carried or kept in the house. Each of the article’s opening pages shows a different bujeok design with footnotes on the use and symbolism of each object.

In the main feature story, gi is described as a source of power. The bujeok in the preceding pages exist as a visual expression of this idea.

“Invisible to the naked eye, no proof of existence,” the article said to explain what gi is. It goes on to say that gi is “difficult to explain scientifically, but to those who grew up in Korea, it is something they know ‘by heart.’ ”

The magazine’s arresting design has caught the interest of readers such as Kim Hye-jin, a 26-year-old graduate student who was browsing through the magazine earlier this month.

“The photos and layout are very unique and it’s different from any other magazine I’ve seen,” Kim said. “It’s a bit pricey for a magazine, but I think it would be a perfect gift for anyone who’s not familiar with Korean culture, whether Korean or non-Korean.”

With a circulation of 5,000 in Korea and the U.S., ofK is available in bookstores and souvenir shops in Seoul and by subscription.

Park said he also has plans to publish an electronic version of the magazine in English but said his biggest challenge lies in figuring out how to translate the paper magazine into a digital publication while retaining both its visual and tactile elements. 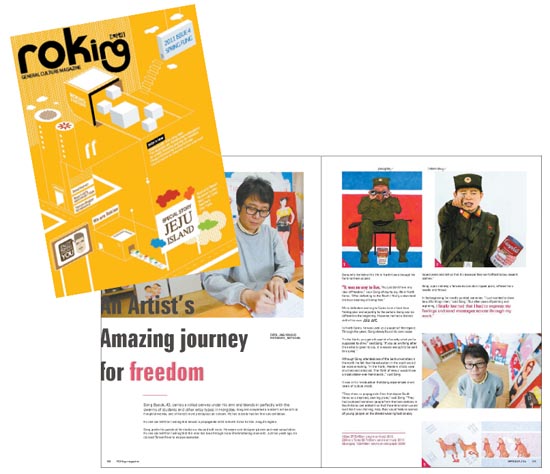 ROKing Korea was started by a college graduate who wanted to spread Korean culture to a global audience. Provided by ROKing Korea

Founder Sarah Byon said she was inspired to create ROKing Korea after constantly having to explain the country’s economic development and cultural characteristics to her classmates while she was attending college in the United States.

“It’s a shame that people just think of Korea as a country that is poor,” she said. “I felt an urge to let them know exactly where Korea stands and how well developed and cultured it is.”

Byon said she was also attempting to fill a growing demand for information about K-pop stars and trends.

“I didn’t think that K-pop was such a big part of Korean culture, but I soon realized I was wrong,” Byon said. “Many people were looking for a source of information about the Korean stars they had come to love.”

The current issue is a mix of information on food, recipes, Seoul street fashion and travel destinations.

Like ofK, ROKing also tries to provide readers with an introduction to traditional and modern elements of Korean culture. The spring issue, for example, has a feature on traditional hats from the Joseon Dynasty and another about women’s accessories in the Joseon and Silla dynasties.

The magazine also spotlights working artists in the visual and performing arts, and the spring issue has an article about jewelry designer Kim Jong-mok as well as one about artist and North Korean defector Song Byeok.

Upcoming editions will include features on popular indie bands and more, Byon said.

The magazine began as a monolingual publication in English but is now bilingual with all content in English and Korean. It is distributed for free to colleges and restaurants in the U.S., Canada and Australia and at locations around Korea for a circulation of around 8,000. It is also available through subscription. 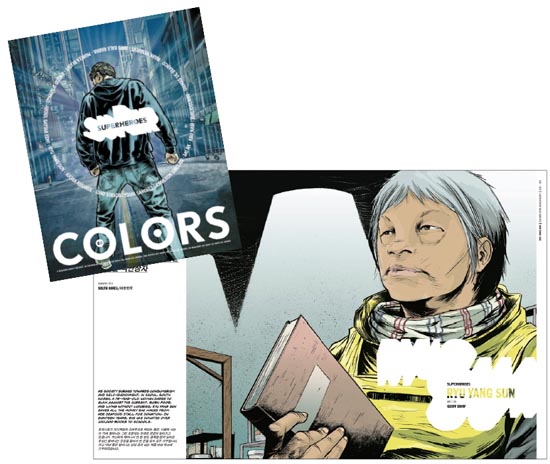 In its Spring issue, Colors magazine features comic book inspired tales of 11 people who are trying to change the world, including Ryu Yang-sun, a Korean grandmother who donated 8 million dollars in land and scholarships to universities and 4 million dollars in books to schools. Provided by IntNet

Like ofK magazine, Colors is a monothematic magazine that relies on striking imagery, photographs and graphic art. Its stories deal with a broad range of political and social issues, as well as fashion and art.

Said Patrick Waterhouse, publishing director of Colors magazine: “There is no Colors formula for story selection, but there is the inherent philosophy of searching for the ‘other.’”

Beginning with issue number 76 in January 2010, the magazine also began including stories about Korea. The issue, “Teenagers,” contained a story about how administrators at girls’ schools in Korea cut students’ hair if it is longer than regulation length and clip uniforms that are too short so students have to buy new ones. The next issue, “The Sea” (August 2010), turned to the gradual disappearance of haenyeo, women divers, on Jeju Island.

And the 20th anniversary issue from April of this year, titled “Superheros,” tells the stories of 11 ordinary people who are trying to make the world a better place.

Following on the superhero theme, the stories are told through comic book illustrations by international artists with a narrative prologue and epilogue.

One of the “superheros” featured is Ryu Yang-sun, 78, a fishmonger who donated the majority of her income to education. After years of selling jeotgal, or fermented fish, at a local market, Ryu managed to donate $8 million in land and scholarships to universities and $4 million in books to schools, according to the article.

“It was very refreshing for [readers] to read a very familiar story written in a very unfamiliar way - in comic book style and interpreted by foreign writers,” Waterhouse said.

Since its establishment in 1991, Colors has remained committed to making its content available to a broad readership in multiple languages. It publishes bilingual editions in English plus Italian, French, Spanish and Korean. Its circulation in Korea is 5,000.

“English was chosen as the international language to make the magazine understandable everywhere, but equal weight and importance were given to the other national languages,” Waterhouse said. “Language is one of the most important expressions of a culture. Anticipating what is now a trend, Colors always intended to be ‘glocal.’”