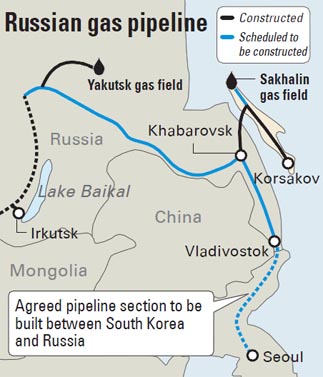 When South Korea in 2008 agreed to import Russian natural gas in a 30-year $90 billion deal, Blue House officials were sanguine.

For a country that imports nearly all of its energy needs, South Korea’s deal with Russia would provide 20 percent of the energy-hungry nation’s projected demand in 2015, when the agreement is to take effect.

The preferred method of delivery, the two countries said, would be a pipeline from Vladivostok to the South. Conspicuously missing from the announcement, however, was a matter of simple geography with complicated implications: North Korea, which lies between buyer and seller, did not participate in the agreement.

That the reclusive regime would be party to supplying critical energy needs to its southern nemesis seemed difficult to imagine as late as last month - nearly three years after the deal was struck. Indeed, with inter-Korean relations seeing a gradual but steady deterioration in the intervening years, the pipeline had been in limbo.

But in recent weeks, several diplomatic breakthroughs have indicated a shift in momentum toward the pipeline’s construction - most notably Kim Jong-il’s reported agreement to the deal in his meeting with Russian President Dmitri Medvedev on Aug. 24.

On Wednesday, the chairman of the ruling Grand National Party, Representative Hong Joon-pyo, disclosed that the two Koreas and Russia would start negotiations on the pipeline project in November.

Economic cooperation with the North, Hong added, and the resumption of aid would create a breakthrough in frozen inter-Korean relations.

“There is an expression - the tail wagging the dog,” Hong said.

Yet despite the diplomatic flurry, analysts and experts say building a pipeline through North Korea is still far from a done deal, and many have begun questioning the economic benefits of the proposed project - a deal already fraught with geopolitical risks. 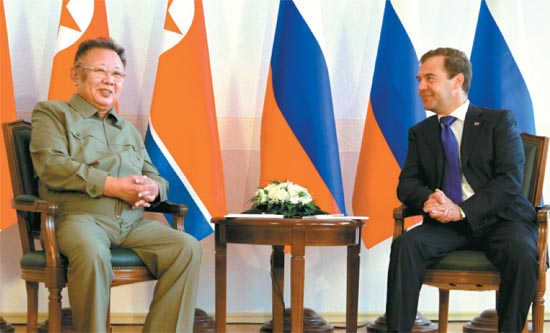 When the natural gas deal was made during President Lee Myung-bak’s visit to the Kremlin in late September 2008, the two countries were eager to pursue the construction of a pipeline.

A pipeline, the Blue House explained, was the most cost-effective way to annually ship 7.5 million tons of natural gas over three decades. The agreement, signed by Korea Gas Corporation and Russia’s Gazprom, also included a joint study on the feasibility of a pipeline. At the time, Seoul said Russia was already in discussions with North Korea on the project.

If a pipeline proved to be unfeasible, Russia planned to liquefy the natural gas and send it to South Korea by ship. But the alternative plan, the Blue House said, would be more costly, with the Ministry of Knowledge Economy saying that building a pipeline would be cheaper for a distance of less than 3,000 kilometers (1,900 miles). The distance from Vladivostok to the inter-Korean border measures about 700 kilometers.

Seoul also enticed Pyongyang by reminding its cash-starved neighbor of the pipeline’s lucrative payoff: $100 million of hard currency per year as a passage fee. The government said that Russia would pay the fee, as is customary for the seller, and that North Korea would also earn revenue by providing labor to the build the pipeline.

But despite signs of progress in recent weeks, experts and officials in Seoul are skeptical about a sudden breakthrough.

The biggest obstacle to building the pipeline will be North Korea’s military, a senior Ministry of Unification official said last month.

“To build the gas pipeline, it is necessary to carry out geological and aerial surveys,” he said. “South Korean experts and laborers will need to stay in the North to participate in the project, and some military bases may need to relocate. The military’s protest of the project is somewhat unavoidable because the pipeline will go through the demilitarized zone.”

A Blue House official conceded the complicated nature of the pipeline project, contrary to presidential aides’ optimism in 2008 when the idea was first proposed.

“It’s not something that can be done overnight,” said the official. “It is also too premature to say that the president will have a summit with the Russian leader in November to discuss the project.”

Speculation has been raised that Lee would sit down with his Russian counterpart in November, when the two leaders are scheduled to attend an APEC meeting in Hawaii, a G-20 Summit in France and an EAS meeting in Indonesia.

Yang Moo-jin, a professor at the University of North Korean Studies, said despite expected talks between the two Koreas and Russia in November, there was a long road ahead for the three countries to actually implement the project.

“The distrust between the two Koreas runs deep, and the atmosphere for inter-Korean talks has not been created yet,” Yang said. “Even if Lee and Medvedev meet, they will likely reaffirm their commitment to the project and urge the three countries to move forward with the plan.”

Yang, however, dismissed some government officials’ prediction that the North’s military would protest the project.

“North Korea is a dictatorship, and what matters the most is Kim’s will,” Yang said. “The North may employ a strategy of using the military’s objection to up the ante at the negotiating table to maximize its gains.”

Yang predicted that the pipeline, if realized, would be built along the eastern coast of the peninsula because military installations are largely concentrated along the western side between Sinuiju and Pyongyang.

“I believe Kim must have made up his mind to at least allow the construction along the east coast,” he said.

While government officials and North Korea experts discuss the political implications of the project, an energy expert said the pipeline construction should be approached solely based on economic calculation, not politics.

“This is a negotiation, but Korean politicians are speaking too hastily,” said Choi Ki-ryun, professor of energy studies at Ajou University. “They say the pipeline project will allow Korea to buy natural gas up to 30 percent cheaper, but I don’t think anyone has presented specific calculations to back their claims.”

Choi said that decades-old European pipelines are often cited by Seoul officials and politicians to promote the pipeline project, but that it was wrong to compare them with the Korean plan.

“In Europe, investments on the pipelines were made quite a while ago, so the deals have already reached the break-even points,” Choi said. “But we are now talking about beginning the infrastructure investment, and we must carefully calculate if the pipeline is really a cheaper option.”

He said natural gas prices are dropping as more reserves are discovered around the world.

“The price will get lower,” Choi said, “and it is necessary to calculate the risk of a long-term energy project, rather than focusing on political meanings.”

A study conducted by his team at Ajou University recently explored the economic viability of the pipeline project spanning the two Koreas and Russia, Choi said. Largely based on Russia’s data, the study found that the price of natural gas sent via pipeline would be only two percent lower than the price of liquefied natural gas when the oil price is $130, because Russia only gives tariff benefits to liquefied natural gas importers, Choi said. “And on top of it, it is necessary to factor in the North Korea risk,” Choi said. “We have to always keep in mind that a safeguard is necessary to prepare for a possible shutdown of the pipeline by the North. And it is important to reflect that risk when negotiating the deal with Russia.”