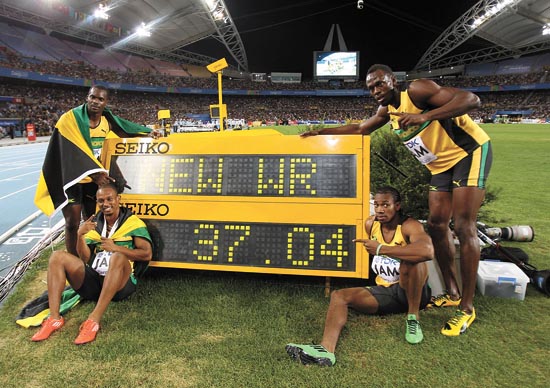 
A false-starting, world-record-breaking and finally boogie-dancing Usain Bolt was the big story of the recently ended World Championships in Athletics. But the enthusiasm of Korean fans - to most of whom athletics was an alien concept nine days earlier - has been something of an overlooked bookmark that means the event achieved another of its goals: reaching out to a broader audience in the region and turning people onto athletics.

The Worlds that wrapped up in Daegu on Sunday were nothing if not unpredictable, with Bolt’s false start and subsequent disqualification in the 100-meter final on day two setting the tone for much of what followed. Similarly, no one was expecting Jamaica to smash its own world record in the men’s 4x100-meter relay in the final seconds of action in Daegu.

And perhaps even fewer were expecting Koreans to wave flags, dance in their seats, bang thunder sticks and bring binoculars as they filled up the stands on a daily basis to breathe life into a majestic Daegu Stadium.

The International Association of Athletics Federations (IAAF)’s biennial track and field bonanza was also the biggest, in terms of participation numbers, on record. Some 1,945 athletes from 202 countries turned up, with 6,000 volunteers making sure everyone knew where to go, how to get there, and what the words “kimchi” and “fighting” really mean. 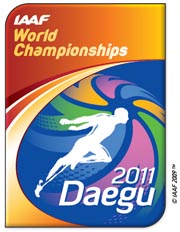 As expected, the United States topped the gold medal table with 12 - and 25 medals overall - followed by Russia with nine (19 overall). Kenya finished third thanks largely to its middle- and long-distance runners.

And while the winner of the long-standing Jamaica-U.S. rivalry on the track remains up for dispute, perhaps the most memorable image of the games, or certainly the last for team America, was seeing relay runner Darvis Patton tumble and dislocate his shoulder socket when trying to pass the baton to teammate Walter Dix in the closing race.

Korea became the third host nation to walk away without a medal, but it won riches of another sort by successfully organizing what is generally regarded as the world’s third-biggest sporting event, said Daegu Mayor Kim Bum-il.

“During these championships, we were deeply moved by the tremendous efforts of athletes, challenging the physical limitations of humanity with their dreams and passion,” Kim said at the closing ceremony. “In particular, with the immense interest of the entire nation, I’m sure that these championships will serve as a milestone for the growth of athletics in Korea.”

In fact, Bolt’s two gold medals on the last two days - he won the 200 meters on Saturday in 19.40 seconds and anchored the relay team to a record 37.04 seconds on Sunday - and the presence of South African double-amputee runner Oscar Pistorius helped redeem a Worlds where few new records were being set.

This was not expected given the main stadium’s fast, and recently laid, Mondo Track. This kind of track has set the stage for 230 world records since it was first used in the 1976 Olympics, but it only produced one world record and two World Championships records this time around.

The latter came from Sally Pearson in the 100-meter hurdles and Mariya Abakumova in the javelin.

Pundits blamed this on the stultifying heat and so many top athletes coming unstuck before even making the final.

Steve Hooker, the defending male pole vault champion, left the event without clearing a bar; Dayron Robles, the world record holder in the 110-meter hurdles, was disqualified for bumping China’s Liu Xiang; and Russian pole vaulter Yelena Isinbayeva also had a disappointing performance. Coincidently, they were all cover models for the organizing committee’s daily guide program, which led reporters to dub this the “curse of the cover.”

“I think athletes have concentrated more on collecting medals rather than setting a record,” said Koo Bon-chil of the organizing committee.

“The high humidity and adverse winds also had a negative influence on athletes’ performances.”

Outside the stadium, there were some operational problems regarding catering and traffic, but these were soon patched up for the convenience of the 445,000 visitors.

“Our sport has been treated like royalty here in Daegu,” said IAAF President Lamine Diack.