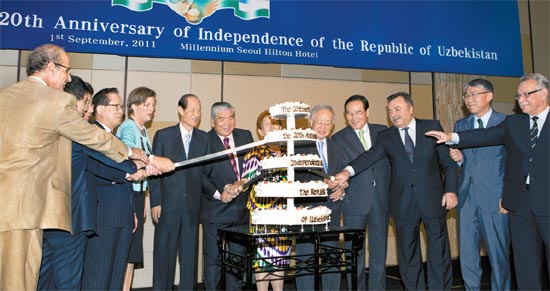 Uzbekistan Ambassador to Korea Vitali Fen, seventh from left, celebrates the 20th anniversary of his country’s independence at a ceremony last Thursday at the Millennium Seoul Hilton Hotel. On hand were several prominent guests, including U.S. Ambassador Kathleen Stephens, fifth from left, former National Assembly Speaker Lee Man-sup, sixth from left, and Chairman of the Korean Chamber of Commerce and Industry Son Kyong-shik, fifth from right. By Park Sang-moon


Uzbekistan celebrated the 20th anniversary of its independence on Thursday at the Millennium Seoul Hilton Hotel with Korean political figures on hand to congratulate the Central Asian nation as well as strengthen relations between the two countries.

Uzbek Ambassador to Korea Vitali Fen highlighted the two countries’ economic links in a welcoming speech, singling out the recent $4.16 billion package of deals signed by President Lee Myung-bak on Aug. 23 during his visit to Tashkent.

The deals are to develop a massive gas field and build a related plant in Uzbekistan.

The ambassador said the project to develop the Surgil gas field near the Aral Sea and build a gas and chemicals plant would have positive effects on further cooperation between the two nations. The Surgil gas field is believed to be holding an estimated 130 billion cubic meters of natural gas (960 billion tons of LNG, or 830 million barrels of oil equivalent).

“We hope that Uzbekistan and South Korea become bilateral partners who can support each other economically,” Fen said.

Fen also announced that Uzbek President Islam Karimov had awarded lawmaker Kim Yong-gu; Son Kyong-shik, chairman of the Korean Chamber of Commerce and Industry; and Cho Yang-ho, chairman of Korean Air with the Dostlik Order for their contributions to the development of the two countries’ partnerships.

Among the guests present at the ceremony were also Chin Soo-hee, minister of health and welfare, and Lee Man-sup, former National Assembly speaker.

Chin congratulated Uzbekistan’s liberation day and praised the country’s economic advances in recent years, pointing out its 8.5 percent GDP growth last year, which was one of the highest in the world.

Chin also emphasized the strategic partnership between Uzbekistan and Korea, and the mutual understanding between the two nations.

“President Lee Myung-bak has visited Uzbekistan twice in his term in office, which is not a common thing,” Chin said in a speech. “I think it strongly proves that the relationship between the two nations is very special.”

Uzbekistan is located in Central Asia and gained its independence in Aug. 31, 1991, after the Soviet Union’s collapse. Sept. 1 was designated as the nation’s official liberation day.