Al Pacino honored in Venice, but says future is ‘blank’

Al Pacino honored in Venice, but says future is ‘blank’ 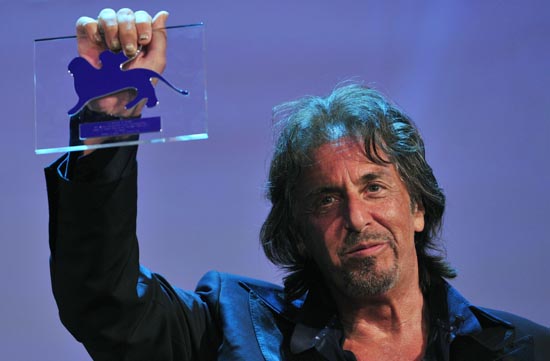 VENICE - American movie star Al Pacino said his future was “blank” and criticized his latest directorial effort, “Salome,” on Sunday, ahead of the film’s public screening at the Venice Film Festival.

“The Godfather” star is in Venice to receive the “Glory to the Filmmaker” award for artists who have left an original mark on contemporary cinema, but said he had “no idea” where he had been going with his latest work.

“I didn’t know where I was going, I’m confused,” he said about “Salome,” a documentary and feature film melange based on Oscar Wilde’s play, the biblical tale of Salome and King Herod exploring the destructive use of sexuality.

Pacino becomes both creator and protagonist as he documents the challenges of making the film, while playing himself, King Herod and, in one scene, Oscar Wilde - with rising American star Jessica Chastain in the role of Salome.

Looking back over his career - which has included films such as “Dog Day Afternoon” and “Carlito’s Way,” and his first docudrama “Looking for Richard” in 1996 - Pacino said he had long been “torn between” cinema and theater.

“I started to take things I liked, an idea or a play, and I filmed it. I’ve made five or six movies on my own, which nobody knows about,” he said.

But the 71-year-old said he had no plans for the future. “My future? It’s blank,” he said.