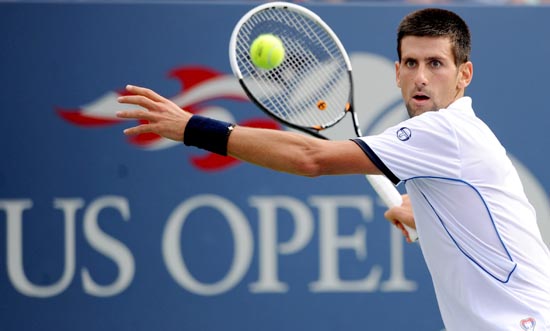 Novak Djokovic of Serbia returns the ball to Alexandr Dolgopolov of the Ukraine at the U.S. Open in New York on Monday. [XINHUA/YONHAP]

Djokovic, who racked up his 61st win in 63 matches this year, will face fellow Serb Janko Tipsarevic in the quarterfinals as he seeks his first title at Flushing Meadows.

“This is one of the longest tiebreakers I ever played,’’ Djokovic said. “It was certainly exciting to be part of it. But, you know, I knew that I needed to win that set.’’

Djokovic saved four set points and finally closed out the set on his sixth chance. When Dolgopolov missed a forehand to give Djokovic the set, Djokovic pumped his fist and put his hands to his ears to take in the applause from the fans at Louis Armstrong Stadium.

In the women’s tournament, Serena Williams fought off the wind, along with brief flurries of effectiveness from her opponent, to advance to the quarterfinals with a 6-3, 6-4 victory over Ana Ivanovic.

Williams closed out the match with four straight serves that Ivanovic couldn’t get back - clocked at between 99 and 111 miles per hour in a blustery Arthur Ashe Stadium that had both players fighting with their tosses and topspin all day.

“I didn’t even go for winners at any point,’’ said Williams, who hit only 16. “I just tried to get it over because it was so windy. It was definitely tough.’’

“After last year’s breakthrough here, when I reached the fourth round, my confidence changed completely. I just started believing in myself, [that] I could reach the second week of Grand Slams,’’ she said. “Before, I was just playing and seeing what happens.’’

Wozniacki turned things around thanks to a combination of her own increasingly aggressive play and Kuznetsova’s increased mistakes. Kuznetsova’s 40-20 edge in winners was rendered meaningless by her 78 unforced errors, 52 more than Wozniacki.

Their match lasted for three hours and two minutes, finishing at 11:29 p.m. to delay the start of the Federer-Monaco game.

She reeled off 12 of the last 14 games by getting slightly more aggressive, and by benefiting from all of Kuznetsova’s unforced errors.

“I know that I’m in good shape. I can play out there for five hours if I have to,’’ she said.

The 21-year-old Wozniacki, the 2009 runner-up at the U.S. Open, has been ranked No. 1 for all but one week since last October but is still seeking her first major championship.