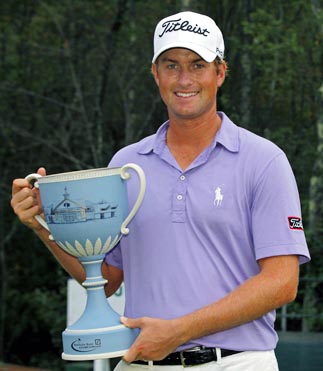 NORTON, Massachusetts - American Webb Simpson finished off an amazing comeback with three birdies, the final one on the second extra playoff hole, to win the Deutsche Bank Championship on Monday for his second title in three weeks.

On a day filled with big crowds and big moments appropriate to the FedEx Cup playoffs, Simpson delivered a stunning conclusion on the TPC Boston.

He looked as if he would be the runner-up until knocking in a 30-foot birdie putt on the par-5 18th hole for a 6-under 65. That put him into a playoff when Chez Reavie, who had birdied the toughest holes on the back nine, made bogey on the easiest hole on the course at No. 18 for a 66. They finished regulation at 15-under 269.

On the 18th hole in the playoff, Simpson again looked to be out of luck when Reavie chipped to tap-in range for birdie. But Simpson rolled in a 15-foot putt to keep the playoff going, and then won with an 8-foot putt on the 17th hole.

Simpson won his first PGA Tour title three weeks ago at the Wyndham Championship, putting him in good shape for the FedEx Cup playoffs and the chase for a $10-million prize.

He now goes to No. 1 in the standings and is assured of being among the top five when the FedEx Cup concludes at the Tour Championship at the end of the month.

“I thought winning the second time would be easier,’’ Simpson said.

That was never the case on a breezy Labor Day south of Boston, a final round so scrambled that seven players - including world No. 1 Luke Donald - had a share of the lead at some point.

Simpson one-putted seven of his last eight greens, mostly for par on the back nine in regulation to stay in the hunt, then received just enough help from Reavie.

The win was filled with perks beyond his ranking in the FedEx Cup race. Simpson locked up a spot on the Presidents Cup team in Australia and moves to No. 14 in the world.

Reavie, who started the season on a medical exemption from knee surgery last year and won’t get his full PGA Tour status back until January, came roaring up the leaderboard on the back nine. He made four birdies in a six-hole stretch and was poised to capture his second PGA Tour title until one wedge cost him.

He laid up on the 18th with a one-shot lead and Simpson already finished, but his wedge sailed over the green, and his 10-foot par putt for the win grazed the side of the cup. The runner-up finish still moves Reavie to No. 9 in the FedEx Cup, assuring him of a spot in the Tour Championship - and in three majors next year, including the Masters.

Brandt Snedeker, who closed with a 61 last week to tie for third, went out in 30 to take the lead until getting wild off the tee on the back nine. He had to settle for a 66 and another tie for third.

Donald, who matched birdies and eagles with Simpson in regulation, fell apart with a double bogey on No. 12 and a tee shot over the 16th green that led to a bogey. He closed with a 67 and tied for third, along with Jason Day, who had a 68.

Bubba Watson, who had a one-shot lead going into the wild final day, chipped in for eagle on the final hole to salvage a 74 that put him in a tie for 16th, seven shots behind.

The top 70 in the FedEx Cup advance to the third playoff event in two weeks outside Chicago, and some big names, such as Ernie Els, only squeezed in by the narrowest of margins.

Choi Kyung-ju, known as K.J. Choi overseas, and Yang Yong-eun also advanced. Choi ranked No. 15 and Yang No. 28 in the FedEx rankings.