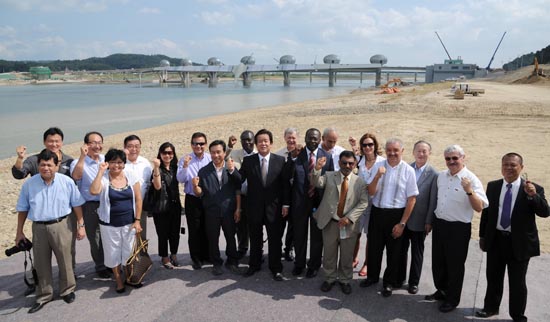 Officials from the Office of National River Restoration and the Ministry of Land, Transport and Maritime Affairs hosted a tour at the Han River as part of a series of events to promote the Four Major Rivers Restoration Project.


Recently the Ministry of Land, Transport and Maritime Affairs and the Office of National River Restoration hosted a tour that informed people about the contents of the four-rivers restoration project.

The tour told people about the current status of the project, future plans as well as the difficulties encountered and what has been learned.

This information was shared with ambassadors to Korea from various countries and it is expected that it will be a great help to these countries in setting up their own water management policies. This is especially true of four particular countries, including Singapore, which have been categorized as countries that are short of water by Population Action International (PAI).

These four countries were invited on the tour in an effort to gain their support and to share information on water-management solutions.

The group visited the Han River in Yeoju, Gyeonggi, and took part in programs including listening to a briefing about the four-rivers project, participating in a question-and-answer session as well as looking around the bicycle course and the auto-camping facility.

Ceferino Adrian Valdez Peralta, the ambassador of Paraguay to Korea commented after looking around the project sites, “Paraguay suffers from extreme floods every year. We are very interested that there is a technology to reduce flood damage and if the four-rivers project technology of Korea is introduced [to Paraguay], it will be an investment and not just a technology exchange between the countries.”

Pierre Clement Dubuisson, the ambassador of Belgium to Korea commented, “As flood and overflow is one of the most common natural disasters in the world, we would like to know more about Korea’s outstanding construction technology and economic ability.”

Lastly Slobodan Marinkovic, the ambassador of Serbia to Korea said, “Despite all the dispute on the four-rivers restoration project, it is very impressive the project was carried out without destroying nature. Once the project is completed, we think it will be one of the representative items of Korea.”

According to the Office of National River Restoration, after the event some of the countries, especially Paraguay, showed great interest in expressing their desire to introduce the river dredge construction technique that has been utilized during the four-rivers project and have requested the support of the Korean government and companies. Also Singapore and Poland, which are also suffering from water shortages, expressed an interest in the project’s technologies and techniques.

Furthermore, all the attending ambassadors to Korea said they will participate in both an international forum and other public events on the issue scheduled for the second half of this year, as well as supporting the promotion and export of the four-rivers project.