[INTERVIEW] ‘Future comes to those who plan for it’

[INTERVIEW] ‘Future comes to those who plan for it’ 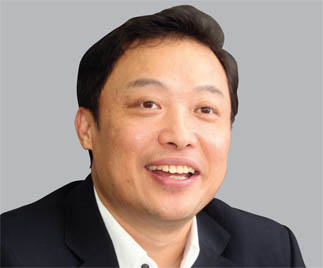 Kwak Seung-jun, Chairman of the Presidential Council for Future and Vision

Kwak Seung-jun, chairman of the Presidential Council for Future and Vision, is known as “the king’s man” because of his influence within the Lee Myung-bak administration. Before Lee became president, Kwak was the brain behind his campaign as director of policy at the Global Strategies Institute.

He was appointed as President Lee’s aide after Lee took power, but kept a low profile after the massive protests against the import of U.S. beef.

In January 2009, Kwak reappeared and was appointed to his current position. The JoongAng Ilbo interviewed him on Sept. 1.


Q. Why do you think you’re criticized so much?

A. If you want to keep your feet planted in reality but plan for the future, you must come to terms with the present. The IT crisis in Korea came about because the present was poorly planned for. What I do is renovate and reform what already exists and conflict is an unfortunate symptom of that.

Imagine yourself 30 years into the future and make an assessment of the current administration.

When I look back on the past three or four years from now, there will be things to reflect on that fell short of my expectations. The gulf between the rich and poor has widened while market prices have risen. There is also something lacking in bringing together society as a whole and connecting the generations. I’ll think there was a point when the government failed to follow up with trends.

But this has only been the midterms and I believe we can be given a B. There is still the final examination and we will do well. They say there is nothing to do in one year and six months, but that isn’t true.

What was the role of the Presidential Council for Future and Vision when the administration first started out?

We changed the name of a policy-planning bureau into something more future-oriented. The role [of the council] is to predict future strategies, provide power for new growth and work on diplomacy, security, social reform and media contents. These are things that are dealt with by all government ministries. There is not much that one ministry can do by itself right now.

There is quite a lot of turnover at the council. Could you explain this?

We are a task force. I believe this will be the form of future governments. The workers at the council don’t do all the work themselves, but form task force teams with outside specialists. [The turnover] is actually positive in that there is a lot of new blood.

Why research the future?

The future is what’s on everyone’s mind in this generation. The speed of technological development is becoming faster and our world is quickly changing. What we think is 20 years on the horizon may happen in three years. There is very little in the way of variables that the government can control for the future, and the need for research at universities and institutes is getting larger. The future comes to those who plan for it. Look at businesses. There are many places that have divisions with “future” as part of their names. Universities are also following the trend.

What was your stance on the referendum for free school lunches?

It’s a hard issue to talk about as a civil servant. And weren’t the votes done privately? I would like to say two things. First, I wonder whether there was a need for the issue to go all the way to a referendum in the first place. It could have been solved harmoniously through communication. Second, it was very significant in the fact that a welfare debate began with the issue of school lunches. This is the start of a necessary debate.

It is meaningless to debate universal or optional welfare. There is no country that selects one over the other. For instance, low birthrates and an aging society should be dealt with through universal welfare. You have to have rich people have children too. On the other hand, half-price housing policies have to go the way of optional welfare. There is no need to give someone who already owns a house a half-price apartment.

People are talking about the scandal surrounding the superintendent of the Seoul Metropolitan Office of Education.

The handing over of 200 million won ($186,000) is ludicrous. However, I disagree that the superintendent should be elected by majority vote. If they wanted a vote, maybe they could have the regional governing head also run for the position. If that isn’t going to happen, they should go with an appointment policy.

The environment of the IT industry. If the industry does not create the right environment, even the conglomerates are going to get hurt. When you look at Nokia, which has plummeted from its place as the top cellular handset maker, you can’t just be strong at one thing in the IT industry. Look at Apple. They only make the operating system and the shell. The rest is filled by middle- to small-sized companies. Apple has grown because it grew with these businesses together. If there aren’t smart middle- to small-sized companies, then the big conglomerates can’t live, either.

Specialization is important. If you want to make affiliate companies, you have to have a healthy environment. I would also like to point out that Samsung, with other big companies, has fallen into bureaucratism. Their decisions are late and their actions slow.

Do you plan to enter politics?

I am originally a school teacher. The world of politics is a very difficult one. I’ve seen many who went over to that side and came back ruined. Professor Ahn Cheol-soo is also on the Future Council, and if he goes into politics, I believe things will become very difficult for him. Once my work at the future council is over, I would like to go back to my work as a professor.