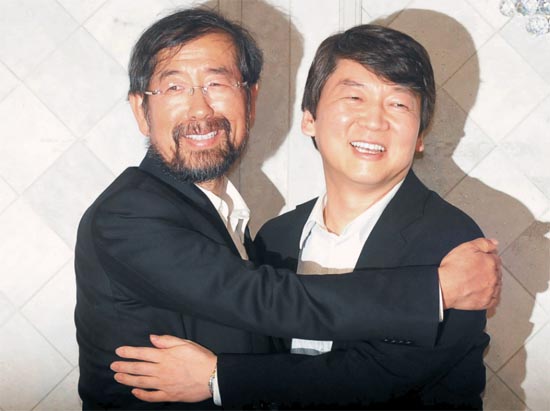 Park Won-soon, left, founder of the People’s Solidarity for Participatory Democracy, hugs Ahn Cheol-soo yesterday after Ahn announced that he would not run for mayor of Seoul and instead throw his support behind Park. By Kang Jung-hyun


Famed software mogul Ahn Cheol-soo announced yesterday that he would not run for mayor of Seoul, throwing his support behind liberal activist Park Won-soon after the pair met for 50 minutes to discuss who would make a run for City Hall.

The stunning development brought to an end, at least for now, Ahn’s meteoric rise that riveted the public, shook the established political order and underscored voters’ deep discontent with the nation’s partisan bickering.

“I have decided not to run in the Seoul mayoral by-election,” Ahn said in a press conference yesterday afternoon. “Instead, I will pay with an honest and hard-working life by not putting myself first but society, without forgetting the expectations of the people who have shown faith in me and supported me.”

Ahn, who has never held public office, shot into a nearly insurmountable lead in a JoongAng Ilbo poll over the weekend after word got out last week that he was considering a bid for City Hall. He led all other prospective candidates and drew support away from both the ruling Grand National Party and the main opposition Democratic Party.

Talk of Ahn’s possible candidacy led to a media frenzy, with many voters enraptured by Ahn’s post-partisan image and his impressive resume - a doctor turned software mogul turned dean at the nation’s most prestigious university.

“I understand the public has high expectations of me,” Ahn said yesterday. “I appreciate it greatly and humbly. But I don’t think anyone has the right to easily win the public’s heart. I believe the expectations of me are not about me alone. I think it was an expression of the public’s desire for changes in our society’s leadership.”

Ahn heaped praise on his longtime friend Park in his endorsement but said he would not participate in Park’s mayoral campaign.

“I am a public servant, so I am sending my emotional support,” Ahn said, referring to his position as dean of the Graduate School of Convergence Science and Technology at the state-run Seoul National University.

“Park has devoted himself to our society, blooming new flowers in grassroots activism,” Ahn said. “I believe he is the person who can perform the job of Seoul mayor better than anyone else.”

Ahn also denied speculation he stepped aside for Park so that he could make a Blue House run next year.

“I was having a painstakingly difficult time making a decision about the mayoral election alone. That was also prompted accidentally, so I have not thought about [a presidential bid].”

Park, who founded the left-wing People’s Solidarity for Participatory Democracy, one of the country’s largest civic organizations, expressed gratitude to Ahn after his friend’s announcement.

“Our true intentions were connected, even though our talks were brief,” Park said. “I think the conclusion is a beautiful agreement, one hard to find in the political arena.”

Conceding the difficulty some may have in understanding Ahn’s decision to back him, Park said the agreement was possible because both were interested in building a better world and not just in the Seoul mayoral post itself.

“I feel far much more responsible,” Park said. “I want our relationship to be more than a political tie, and I want to be together with Ahn to make achievements that can bring about changes to our time.”

Yet the candidates’ standings are bound to change after yesterday’s announcement, with Ahn seemingly parlaying his immense popularity to play kingmaker. In an interview with OhmyNews on Sunday night, Ahn did not mince words about his desire to rout the ruling GNP from power.

Asked if he planned to join the DP for the mayoral election, Park said he would make public more details later.

The GNP appeared to be relieved about Ahn’s decision under the belief that Park would be an easier opponent in the mayoral race.

“Popularity in the political arena is like the steam above a bathtub,” said GNP Chairman Hong Joon-pyo. “I think Ahn fever was not a strong wind, but bubbles. Without political expertise or imagination, a political bid based on sudden popularity quickly runs out of assets.”

But Hwang Woo-yea, GNP floor leader, cautioned against the possibility of Ahn running for president.

“We want to see if Ahn is acceptable as a politician or not,” Hwang said.

The DP, which hoped that Ahn would partake in its primary, were lukewarm to his announcement.

“It is great progress to field a unified liberal candidate,” said Lee Yong-sup, the DP spokesman.

But other DP lawmakers lamented Ahn’s decision step aside.

“The Ahn syndrome has contributed greatly to changing the political framework,” said Park Young-sun, chief policy maker of the DP. “It would have been greatly appreciated had the syndrome continued to create further stir to advance our politics.”