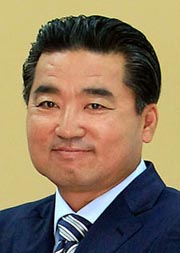 BUSAN - Jang Hyo-jo, who owned the best career batting average in the Korean baseball league, died early yesterday of liver cancer. He was 55.

Jang succumbed to the disease about a month after he was hospitalized, Dong-A University Medical Center in Busan said. He is survived by his wife and a son. The funeral will be held at the medical center tomorrow.

Jang played 10 seasons in the Korea Baseball Organization (KBO), the first six with the Samsung Lions in Daegu. His career batting average of .331 remains unchallenged.

The left-handed outfielder led the KBO in batting average with .369 in 1983, his rookie year, and went on to win three more batting titles. His career-best of .387 in 1987 is the third-best in a single season.

He also topped the KBO in on-base percentage in six seasons and won five straight Gold Glove awards from 1983 to 1987 for defensive excellence.

Jang first learned of his condition in late July after attending KBO All-Star festivities in Seoul. As the league celebrated its 30th season, Jang was voted by fans as one of the 10 greatest players in the league’s history. He had been working as a minor league manager for the Lions.

After hearing of his death, baseball fans, players and coaches sent their condolences. “He was one of the players who dominated the era, and I feel sad that he left us so early,” said Lions Manager Ryu Jung-Il.