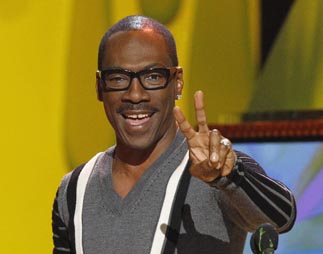 Ratner called the 50-year-old entertainer “a comedic genius; one of the greatest and most influential live performers ever.”

“With his love of movies, history of crafting unforgettable characters and his iconic performances - especially on stage - I know he will bring excitement, spontaneity and tremendous heart to the show Don and I want to produce in February,” Ratner said.

Mischer called Murphy “a truly groundbreaking performer” whose “quick wit and charisma will serve him very well as Oscar host.”

This will be Murphy’s first time hosting the Academy Awards. He said in a statement Tuesday that he is “enormously honored” to join the ranks of past Academy Awards hosts such as Johnny Carson, Bob Hope, Billy Crystal, Steve Martin and Whoopi Goldberg.

Murphy started as a standup comic when he was 15 and has gone on to amass dozens of film credits as a writer, actor and producer.