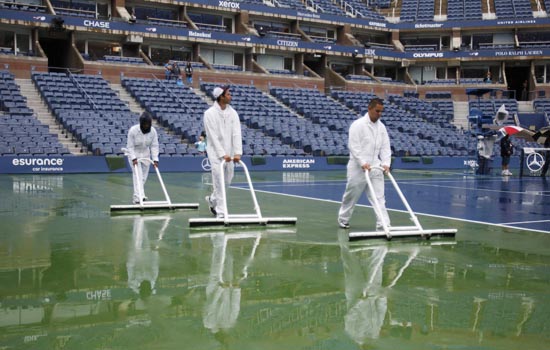 Workers attempt to remove water from the playing surface of Arthur Ashe Stadium as rain postponed play at the U.S. Open on Tuesday. [REUTERS/YONHAP]


NEW YORK - On Tuesday afternoon, Rafael Nadal settled in at a table in the U.S. Open players’ cafeteria and sprinkled some salt on his lunch of salmon and rice.

The day’s work for the defending champion was complete, consisting of a one-hour practice session indoors at Flushing Meadows instead of his scheduled fourth-round match outdoors, because steady rain washed out all of Tuesday’s action.

During last year’s run to his first U.S. Open title, which completed a career Grand Slam, Nadal served superbly - “His best serving in one tournament,’’ Uncle Toni called it - regularly hitting aces at more than 130 miles per hour and getting broken a total of five times in seven matches.

This year, Nadal has already been broken nine times in three matches, and six in his opener alone.

“In the first round, he played no good. He made so many mistakes. He was broken so much. But after, he played so much better,’’ Uncle Toni said. “I’m not worried about his serve. His serve isn’t a problem.’’

Indeed, their biggest concern suddenly is when the weather will allow players to get back on court. As it is, the men in the second-seeded Nadal’s half of the draw - such as No. 4 Andy Murray, No. 21 Andy Roddick and No. 28 John Isner - could be forced to play four matches in five days, or even worse.

The men in the other half of the field, including No. 1 Novak Djokovic and 16-time major champion Roger Federer, have already progressed to the quarterfinals.

“It’s a huge advantage for the top half right now. They have one match to play in the next four days, and the other guys have two - and then they’ll have two more after that,’’ said U.S. Davis Cup captain Jim Courier, a four-time Grand Slam title winner. “It’s the luck of the draw.’’

Citing financial concerns and technical complexities, the U.S. Tennis Association says it doesn’t have plans to put a roof on Arthur Ashe Stadium, although it is still studying possible options. Past estimates put the cost of a roof at $150 million to $200 million.

Tuesday was the first time play has been delayed by rain this year, postponing a total of 54 matches - four in the fourth round of men’s singles, two in the quarterfinals of women’s singles, along with doubles and juniors - at least until yesterday, when the forecasters predicted more rain.