Not enough heart to hold onto in ‘Make Yourself at Home’

Not enough heart to hold onto in ‘Make Yourself at Home’ 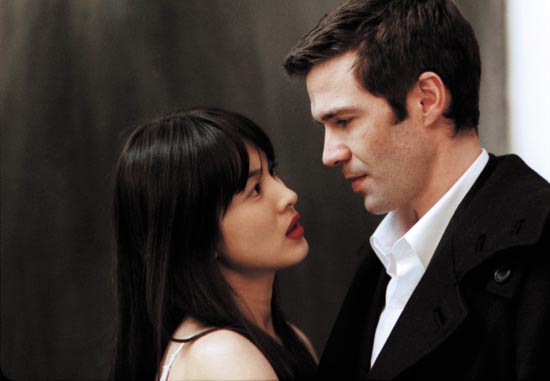 A still shot from the film “Make Yourself at Home.” Provided by Starfish Pictures


A beautiful young Korean woman who descends from a line of female shamans moves to suburban New Jersey to run away from the life for which she was destined and marries a spoiled, Korean-American momma’s boy with a fanatic Christian mother.

As soon as she and her husband move into their new home, she develops a fantasy about living as the happily-married blond woman next door. Not long afterward, her new husband dies from an incident with some expired magic mushrooms - or was it his mysterious wife who killed him?

Sounds quite intriguing, no? There is so much potentially rich subject matter to play with here - from the immigrant experience and inevitable culture clash to the tribulations of a Korean-American church as it comes face to face with the occult.

Sadly, none of these elements are developed or integrated into the plot and the film ends up being a “blah” blurb of an unmemorable story.

Korean superstar Song Hye-kyo stars as Sook-hy, the mysterious Korean bride who arrives in the U.S. after she marries Korean-American Peter through a matchmaking agency. She is bullied by her mother-in-law (June Kyoto Lu) and has a difficult time adjusting to her new life in a foreign country when she meets Peter’s friendly next-door neighbors, John (Arno Frisch) and Julie (Athena Currey).

One night, Julie, Sook-hy and Peter take some marijuana and magic mushrooms, and Peter dies. On the surface, his death seems like a bad reaction to the magic mushrooms, but Sook-hy senses that it was because she is cursed. Soon afterward, Peter’s mother kills herself by drowning in John and Julie’s swimming pool.

By this time, Sook-hy is a frequent guest at John and Julie’s house and develops a crush on John. As expected, this results in a face-off between the two women that ends with a twist that, frankly, could have been predicted 10 minutes into the film.

One thing that first-time director Sohn Soo-pum, who is perhaps better known as a cinematographer, does well in this film is using the visual elements at his disposal to his best advantage. Under his direction, shots of Sook-hy and Julie’s blood red lipstick, the glasses of red wine frequently held by the lead characters, the paleness of Julie’s face and blond hair, and the stark, almost David Hockney-esque, indoor swimming pool at John and Julie’s house all contribute to a beautifully eerie atmosphere that doesn’t lend itself to any particular period in time.

In “Make Yourself at Home,” Sohn tries very hard to keep an artistic subtlety while, at the same time, trying to create a chilling psycho-thriller with an action-packed twist, and the two attempts ultimately nullify one another. In addition, we never hear the director’s own thoughts on immigrant society or assimilating into American culture and the film never feels personal.

Because Sohn doesn’t go quite far enough in his storytelling or attempt at mixing genres, the film fails on both counts and, in the end, we are left with a movie that is neither thought-provoking nor all that entertaining.

Make Yourself at Home