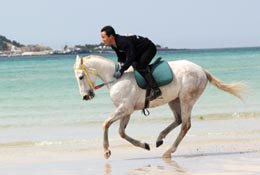 Actor Cha Tae-hyun returns to the silver screen with a touching family movie just in time for the Chuseok holiday.

Based on a true story, the film depicts the relationship between a recently injured racehorse named Woo-bak and the jockey (Cha Tae-hyun) who tries to tame her.

Seung-ho is a promising jockey who is expected to win his next major race when he is in a car accident that results in the death of his wife and damages his eyesight. As he struggles to regain his will to live, he is encouraged by his daughter Yae-seung (Kim Su-jung), who is the only person left who believes in him now that his career appears to be over.

One day, Seung-ho meets a racehorse named Woo-bak who inspires him to restart his career. But Woo-bak is also struggling with life. When the two meet, Woo-bak has just been in an accident that caused her to lose her baby and left her with a debilitating leg injury, and she no longer seems to want to race.

Recognizing that they have similar physical and mental wounds, Seung-ho reaches out to the animal and helps bring her back to life. Together, they develop a strong friendship and enter the race of their lives.

Cha Tae-hyun is known for his role in the 2008 hit comedy “Speed Scandal” and the 2004 romance “Windstruck.” 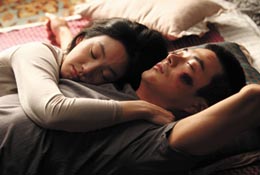 After losing his family when he was young, Nam-soon (Kwon Sang-woo) feels no pain. He cannot feel physical pain and is emotionally barren until he meets Dong-hyun (Jung Ryeo-won), who calls herself a vampire because she suffers from hemophilia. Unlike Dong-hyun, when Nam-soon is injured, she bleeds from even the smallest wound. As the two grow closer, Dong-hyun suddenly begins to lose his lifelong insensitivity to pain and the hurt of a lifetime washes over him. 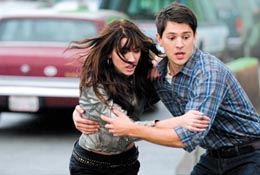 Death is coming - in 3-D. The latest installment of the “Final Destination” series makes its Korean debut after its August release in the United States.

“Final Destination 5” is Steven Quale’s first feature film as a director, although he was assistant director of blockbuster projects “Avatar” and “Titanic” and worked on “Terminator 2: Judgment Day” and “The Haunted Mansion.”

“Final Destination,” the original film, hit theaters back in 2000. Over a decade later, the premise still makes enough money at the box office that directors keep churning out seemingly identical installments. In “Final Destination 5,” Sam Lawton (Nicholas D’Agosto, who plays Hunter in “The Office”) saves his friends from a collapsing bridge after he has a vision foretelling the disaster. But this was not part of the written order, and death comes searching for those who escaped one by one.

Young adults are killed in jaw-dropping, spine-chilling ways. (Think acupuncture needles and laser eye surgery.) Like the previous films, “Final Destination 5” is not about the plot or character development. Rather, it’s a form of entertainment that both sickens and enthralls. For over 12 years, Final Destination screenwriters have been asking: “What is the most disturbing way someone could die?” The answers have raked in over $500 million. 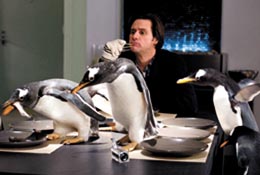 If you’re looking for a movie that will entertain the kids, “Mr. Popper’s Penguins” offers adorable animated creatures and a storybook happy ending that will keep them smiling for days after the trip to the theater. And, should the adults accompanying the children be able to suspend their disbelief of the fantastical plot for even just a few moments, they, too, will find the family-focused adventure to be heartwarming.

Tom Popper, Jr. (Jim Carrey) is a talented real estate broker who, while on top of the world at the office, has a family life leaving much to be desired. Recently divorced, he lives alone and neglects his two children in favor of office work - at least until the penguins arrive. When Popper’s absentee father dies, he bequeaths to his son a penguin named Captain, who is quickly followed by five of his friends.

The penguins turn Popper’s carefully crafted professional life upside down, causing him to lose his job. Popper simply cannot ignore the needy animals like he does his own children, and he takes on a fatherly role, while his work colleagues perceive him as descending into insanity.

Somewhere along the way, Popper’s character changes for the better and his affection for the penguins grows to include his long-neglected human family. He wins back his children, and the reunited family goes on a touching journey to rescue the penguins from a smuggler and return them to their Antarctic homeland.

The moral of the story? Keep your family close. And getting a pet couldn’t hurt either.

Young Sally is encouraged by the whispering voices that emanate from the basement of the creepy house, voices that offer friendship. Sally is lured by these devilish voices to unwittingly open a gateway to hell through which an army of nightmarish creatures swarm. Sally attempts to warn her new family but in true horror-movie style, nobody believes her.

Writer Guillermo Del Toro (“Pan’s Labyrinth”) said of the film that it is the scariest of his generation. In making it, he sought out the only surviving member of the writing team who created the original 1973 TV movie and wrote the screenplay along with his writing partner Matthew Robins. The entire process, from tracking the rights to the original to filming the Del Toro version, took from 1993 to 2009, a mammoth 16 years.

In the film, viewers will recognize various elements from “The Shining” as well as a hint of “Gremlins.” There will most certainly be scary moments that will make even the most cynical cinemagoers jump.