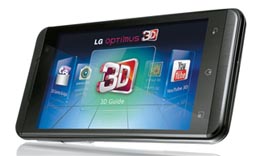 LG Electronics, the world’s third-largest mobile handset maker, said yesterday that its new smartphone with 3-D features was launched by the second-largest mobile carrier in the United States this week.

LG Electronics has been betting big on 3-D features to differentiate its products and to command premium prices in response to challenges on multiple fronts with slow TV sales and a loss-making mobile business.

The new Android-powered mobile phone will likely pit itself against another 3-D capable phone by LG’s Asian rival, HTC Corp.

In June, the Taiwan-based phone maker launched the EVO 3D in the U.S. market.