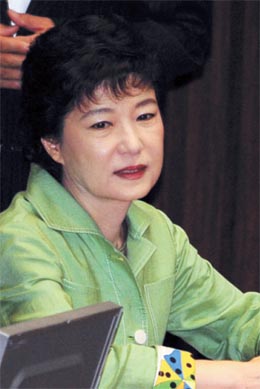 Park Geun-hye, former chairwoman of the Grand National Party, is no longer the front-runner in the 2012 presidential race.

According to polls taken Tuesday, software mogul Ahn Cheol-soo’s meteoric rise as a potential political force knocked Park from the front-runner plinth she has occupied since 2008.

After the 49-year-old political maverick decided not to run for Seoul mayor next month, conceding to his friend Park Won-soon, speculation turned immediately to the prospect that he might run for president in December 2012. The polls showed that 15 months before the election, Ahn has the most support of any other figure.

Realmeter conducted a nationwide survey on Tuesday shortly after Ahn announced he wouldn’t run for the mayoralty. The poll simulated a two-way presidential race between Ahn and Park, daughter of the late former dictator Park Chung Hee.

Ahn led Park by 2.6 percentage points. According to the poll, Ahn was backed by 43.2 percent of respondents, while Park received 40.6 percent of the votes.

It was the first time that Park was beaten in polls since the Lee Myung-bak administration began in 2008, the polling company said.

“Centrists in their 40s and floating voters headed to Ahn,” said Lee Taek-soo, head of Realmeter. “This is the first challenge to the ‘invincible Park’ argument.”

A breakdown showed that Ahn was largely backed by voters in the Jeolla provinces, Chungcheong, Gyeonggi and Incheon, the traditional strongholds of a liberal candidate, while voters in Gyeongsang, Gangwon and Seoul showed support for Park.

Park’s supporters were older, largely above 50 years old, while Ahn was backed by voters in their 20s to 40s.

In a similar poll conducted by Newsis and Mono Research on Tuesday, Ahn was backed by 42.4 percent of respondents while Park was supported by 40.5 percent.

Park, known for extreme prudence in making public remarks, gave a rare reaction to the Ahn phenomenon yesterday. “We should regard this situation as an opportunity for our politics’ new start,” Park said. She did not react to the polls specifically.

On his way to work yesterday morning, Ahn said he had no time to think about a presidential bid.

“That’s absurd,” Ahn said. “I have no time to spare to even think about it.”

He also said his sudden popularity, outpacing Park, “must have been temporary.” Asked if he had given up his political ambition, Ahn said, “It feels like about five years passed now. I had no thought about it and suddenly made headlines in five days.”

Ahn, dean of the Graduate School of Convergence Science and Technology at Seoul National University, was scheduled to have a “Youth Concert” lecture in Gumi, North Gyeongsang, yesterday evening, his first public appearance since declining to run in the Seoul mayoral race.

Ahn and Park Kyung-chul, 47, a stock analyst and surgeon at the Andong New World Clinic, have been giving lectures nationwide since 2009 to discuss current affairs and problems in Korean society, and thousands of Koreans in their 20s and 30s have attended. The lectures are called “Youth Concerts.”

Although the ruling GNP tried to play down the significance of the Ahn phenomenon, Ahn has already declared war by saying he wants to stop the ruling party’s further political expansion in Korean society.

In an interview with CBS yesterday, Won Hee-ryong, a GNP Supreme Council member, expressed his concern about the Ahn phenomenon, calling it “the highest typhoon warning.”

“Whether or not Ahn has political experience, he is walking the political path with his apolitical stance,” said Won.

“I think he will run [in the presidential election],” he continued. “Even if a tree wants to stand alone, others will not leave it alone.”

Won said Ahn’s decision to yield the Seoul mayoral candidacy to his friend Park will create “a tough storm” for the GNP because the public was touched by his perceived selflessness.

Representative Chung Doo-un, head of the Youido Institute, a GNP think tank, was quoted by CBS as saying that the belief of an invincible Park Geun-hye is now broken.

“It is actually fortunate that Ahn fever arrived now rather than later,” Chung said. “We should turn over a new leaf and line up for the battle.”

Park loyalists were also worried. While some of her supporters said there was no need to react hastily because Ahn’s popularity is just a temporary phenomenon, others said they are made uncomfortable by Ahn’s rise.

“She should have more opportunities to communicate with the people.”