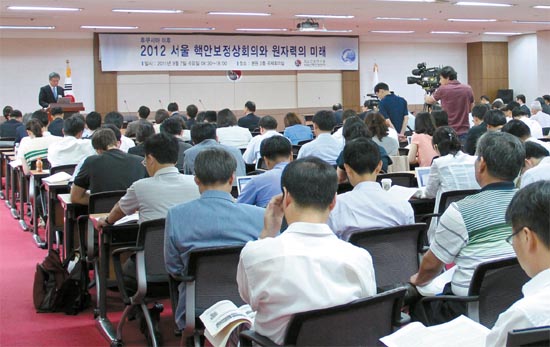 Scholars and officials attend a seminar on nuclear security held at the Institute of Foreign Affairs and National Security in Seoul yesterday, to mark 200 days ahead of the Seoul Nuclear Security Summit. Provided by the IFANS


One of the burning issues of our time is the secure management of nuclear materials and facilities. The breakup of the Soviet Union in the 1990s ratcheted up worries about loose nukes, as did the development of atomic weapons by countries like Pakistan and North Korea. On Sept. 11, 2001, the world realized that ambitious terrorists would almost certainly try to get their hands on nuclear materials - either an actual bomb or materials that could be used for a so-called “dirty bomb” - and six months ago a natural disaster in Japan rapidly became a nuclear emergency that has yet to be fully controlled.

Those were the issues addressed at the nuclear security summit begun by U.S. President Barack Obama in Washington in April 2010, and the second summit to be held in Seoul early next year is expected to speed up the global conversation.

In 200 days, the Seoul Nuclear Security Summit and the Korean government is shifting into high gear to prepare for its biggest diplomatic event ever. The dates of the summit are March 26-27, 2012.

The efforts include awareness-raising campaigns and the opening of two official Web sites today. The Web site in Korean is www.seoulnss.go.kr and the English version is www.thenuclearsecuritysummit.org. 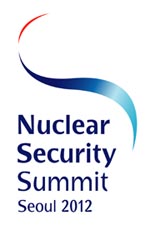 In another promotion effort, a seminar on nuclear security was held yesterday by the Institute of Foreign Affairs and National Security.

Top local experts in nuclear security, foreign affairs and international law gathered at the seminar, which was on the theme, “The 2012 Seoul Nuclear Security Summit and the Future of Nuclear Energy: Post-Fukushima Era.”

“The Seoul nuclear summit will build good momentum to discuss how to use nuclear technology for the good of world peace and international security as well as how to jointly cope with rising threats of nuclear terrorism,” said Jun Bong-geun, a professor at the IFANS, at the seminar.

The first nuclear security summit was held in response to a call by Obama a year earlier for coordinated global efforts to prevent terrorists from obtaining and using nuclear weapons.

In a speech in Prague in April 2009, Obama proposed a goal of securing the most vulnerable nuclear material from terrorists within four years. Heads of 47 nations and three international organizations attended the first summit.

Seoul is expecting more leaders at its summit.

That would make it the largest diplomatic event held by Korea, even bigger than the Seoul G-20 summit in November 2010, in which 40 top leaders or representatives participated. In fact, the nuclear summit is the worlds’ second largest summit in terms of the number of participating leaders after the United Nations General Assembly.

The gross number of participants at the Seoul nuclear summit is also expected to surpass attendance of previous summits in Korea, including the 10,000 who attended the G-20, the 7,000 at an APEC summit in 2005 and the Korean-Asean summit in 2009, and the 4,600 at an ASEM summit in 2000.

The agenda of the Seoul summit is still under discussion but many of its items will be follow-ups to the first summit in Washington, such as response mechanisms to nuclear terrorism, protection of nuclear materials and nuclear facilities and prevention of illegal transfers of nuclear materials.

The issue of nuclear safety - protection of nuclear materials against natural disasters - is a new topic that’s likely to be discussed following the nuclear crisis at Japan’s Fukushima Daiichi power plant.

Another possible topic is how to keep radioactive materials from terrorists.

The North Korean nuclear issue may not be included on the official agenda because it targets a specific country. But it may be discussed on the sidelines, Foreign Minister Kim told reporters Monday. President Lee Myung-bak invited North Korean leader Kim Jong-il to the summit during a European tour in May on the condition that the North pledges anew to denuclearize.

“Even if he [Kim] does not come, hosting a nuclear summit on the Korean Peninsula and discussing nuclear security with the leaders of at least 50 countries could be a stern message to North Korea that it should drop its nuclear ambitions and join the international community,” said a Foreign Ministry official.

On the sidelines of the summit, Seoul is scheduled to hold international conferences and gatherings of nuclear industry leaders.