In his own words

In his own words 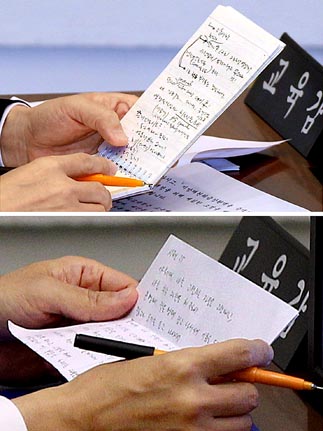 Top, Kwak No-hyun, the superintendent of the Seoul Metropolitan Office of Education who is under investigation by prosecutors for allegedly paying 200 million won ($186,000) to a rival to withdraw from last year’s superintendent election, looks at his notes while attending a City Council meeting yesterday. The notes read: “No secret agreement or illegal transaction; Prosecutors using the media; Attempts to destroy evidence?; Destroying the desktop?; Proof of debt?; Change the initial (spokesman) comment?; Source of 200 million won? ...”