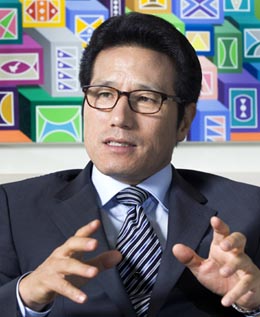 Cultural exports require the support of Korean fans to take off overseas and this is just as true for K-pop as it is for fine art, Minister of Culture, Sports and Tourism Choung Byoung-gug said in a recent interview with the Korea JoongAng Daily.

“Whether it be K-pop or fine art, it cannot enjoy sustained popularity in foreign countries without a solid and broad base of support from local fans here,” he said. As the government aims to spread the Korean Wave further afield, part of its job is therefore to help shore up this support and ensure the full diversity of Korean culture is reflected in what it sends overseas, he added.

Choung was long considered an expert in cultural and media policies before he took the minister’s office in January. The 53-year-old, also a lawmaker with the Grand National Party, previously spent more than 10 years at the National Assembly Committee on Culture, Sports, Tourism, Broadcasting and Communications. He served as chairman of the committee last year.

Choung is scheduled to resign as minister and return to the Assembly as early as this month, as part of the Lee Myung-bak administration’s plan to give him time to prepare for the general election in April.

He said that what impressed him most during his term as minister was seeing the Korean alpine city Pyeongchang successfully bid to host the 2018 Winter Olympics, as well as the rising popularity of K-pop overseas.


Q. What are your best memories as culture minister?

A. I will never forget the thrill I felt in Durban, South Africa, on July 6, when Pyeongchang was finally chosen [at the IOC General Assembly held there] to host the Winter Games.

I also felt great every time I heard foreign officials ask me how K-pop and other parts of Korean culture have come under the international spotlight so quickly. I heard the question often when I visited foreign countries.

Another impressive moment was when I visited a Thank You Small Library (TYSL) in Tanzania in June. [Korea’s Culture Ministry has been setting up TYSLs in African countries as part of official development assistance, or ODA, since 2007.] The children there sang us the song “Thank you, Korea.” At the time, I recalled that I studied with supplies from foreign countries when I was an elementary school student. Korea and I have now turned from receiver to giver.

Do you have any project that you regret not executing, given that you are leaving the minister’s office earlier than expected?

I recognized from the beginning that I would have to leave the office before the general election. So, rather than launch new projects, I focused on improving institutions and executing detailed works, which I thought were needed after working on the Assembly’s committee on culture for more than a decade. I now see the fruits of these labors. In addition, I’ve successfully set the outline of the way the ministry should move forward.

The problem is that it needs a bigger budget for cultural programs; the budget needs to be expanded [from the current 1.1 percent] to 2 percent of the nation’s total annual budget before the end of the Lee administration. As a first step, it should be moved up to 1.5 percent by next year. For this, Culture Ministry officials, including myself, have been working hard and have won consent from many influential figures. But now I have to leave before the expanded budget has been finalized. I’m concerned, as it will not be very easy for my replacement to aggressively push for the budget increase as soon as he takes the job.

Anyway, the culture budget should be increased as it will also help employment. Any culture-related businesses can be a solution in this time of so-called “growth without employment.”

How exactly can this impact unemployment?

For every 1 billion won ($930,000) invested, about six jobs are generated in the manufacturing industry, and 12 to 13 jobs in the culture industry. In addition, culture is a good solution for youth unemployment. Though our jobless rate for young people is lower than in Europe, we still have 330,000 people in this category. Is it because of a general lack of jobs? No.

You know that Korea has brought 400,000 foreign laborers, with many small- and medium- sized manufacturers failing to secure workers. The problem is that there is a lack of jobs that young Koreans want to do. The Culture Ministry polled young people about this, and 32 percent - the largest percentage - answered that they want to do something in a cultural field.

You previously mentioned the global surge of interest in K-pop, but skeptics dismiss this as a temporary phenomenon. What is your opinion?

I don’t think so. You know that Korean people have achieved democratization and industrialization from the ruins [of the 1950-53 Korean War], with little room to turn their eyes to culture. It has not been long since Koreans began fully recognizing and enjoying their own culture. With the people’s interest in their culture increasing, it is natural for it to spill over into foreign countries. The Korean Wave is spreading spontaneously, not artificially.

When I met members of Korean Connection, a France-based organization for fans of Korean pop culture, in Paris in June, I asked how they came to take an interest in our culture. According to their explanation, the leaders of the group were learning Korean language and they listened to K-pop to help them study. Then, as this interest grew, they found related music videos on social networking services and were attracted by the boy bands’ and girl groups’ dances and looks, both of which were new and fresh. Later, their friends began taking an interest in K-pop, and it spread to more and more friends, some of whom were also beginning to learn Korean language. I heard that now those who want to learn Korean language in institutes have to wait for four months before they can get accepted because there are so many applicants.

Some criticize K-pop for being excessively focused on prefabricated dancing groups. You said before that you would make efforts to diversify K-pop. Does the ministry have any plan to do this?

It is true that K-pop needs to become more diverse, to sustain the Korean Wave. As such, when we opened Olympic Hall exclusively for pop concerts at Olympic Park in southeastern Seoul, we also opened a small concert hall exclusively for indie bands there. We also leased some clubs on long-term contracts on the streets near Hongik University .?.?. to provide indie bands with low-rent venues. This is because rent is skyrocketing there now due to the popularity of the Hongdae area. But I think boy bands and girl groups produced by entertainment companies are also good artists.

I also know you are very interested in fine art, which led to a delay of the introduction of the capital gains tax in trades of artworks last year. How can Korea’s contemporary art join the Korean Wave? Also, some people have spoken out against the delayed tax, arguing that many Korean art collectors do not exhibit their collections for the public but just keep them as assets. What do you think about this?

Regarding the second part of your question, it is like asking what came first, the chicken or the egg? As many Koreans view art collecting in somewhat of a negative light, that is, as part of a luxury lifestyle, collectors become reluctant to unveil their collections to the public. But somebody needs to buy artworks in order to help local artists survive and grow.

How has China’s contemporary art scene become so influential in global terms? It is because rich Chinese have been buying the works of Chinese artists. Whether it is K-pop or fine art, it can’t be popular in foreign countries unless it is popular in the domestic market.

*This interview is a prelude to a series of articles on the Korean Wave that will begin running after the Chuseok holiday.