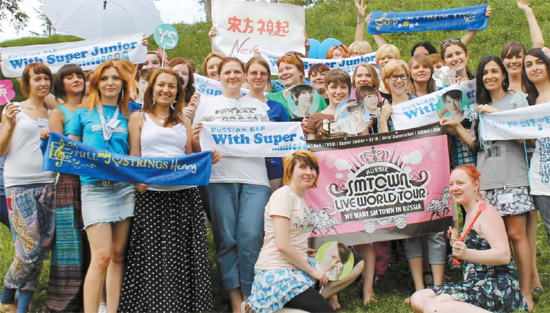 
One Sunday afternoon in late August, 23-year-old Russian K-pop fan Irina Belyakova arrived in Seoul to catch a performance of her favorite boy band, Super Junior, only to find she was discriminated against for not being an ELF.

For ELF, disregard notions of vertically challenged creatures helping Santa Claus pack toys before Christmas. Think instead of a fan group with enough clout to get VIP service at concerts, circumvent waiting lines and get first option on tickets - which, for K-pop concerts, are increasingly being viewed as more precious than fairy dust.

As Belyakova was not an official Ever Lasting Fan - the name of the band’s fan club - her vacation got off to a nightmare start when, after waiting in line for two to three hours, she found that all the tickets had been spirited away and she would be lucky to catch the event later on DVD.

“Even if the show is free, it is difficult for us to get in,” she said of the rising demand for K-pop concerts around the world, but especially for Super Junior - which ranks as one of the biggest (by numbers) boy bands in the world with 13 members. 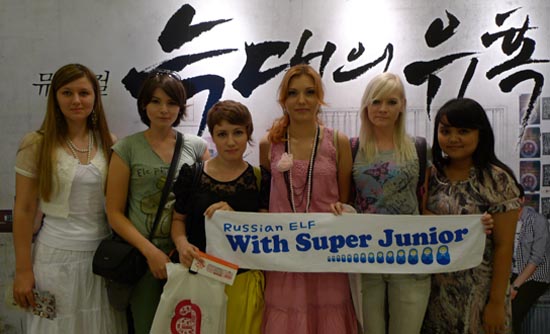 Six Russian K-pop fans pose on Aug. 30 in front of a poster for the musical, “Temptation of Wolves,” which features a member of boy band Super Junior in the lead role. It is running at COEX in southern Seoul. By Yim Seung-hye


In other words, Christmas didn’t come early for this Russian fan, who was hoping - but was denied the chance - to attend the shooting of the “SBS Inkigayo” music show featuring the band at SBS Hall in Deungchon-dong, western Seoul.

It was Belyakova’s love of K-pop that brought her to Korea for the second time in as many years, but she still had two weeks to sample Korean cuisine, visit one of the country’s award-winning theatrical productions and take out her frustration of missing the show in a controlled environment.

Hallyu, a local word for the Korean Wave, began about 10 years ago in Asian countries, but it was only in 2009 that it spread to Russia when people there started to take an interest in Korea-exported pop songs and girl and boy bands.

Belyakova was sufficiently enthused to sign up for (free) Korean classes in Moscow.

“Many people know about Hallyu in Asian countries, and now even in Paris and New York, but I don’t think many are yet aware that there are tens of thousands of K-pop fans in Russia,” said Belyakova.

“Hallyu in Russia is not at the starting point, but it hasn’t gotten to its [zenith] yet, either.” 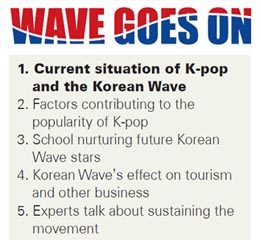 She said Russians are attracted to K-pop because it has “a special Asian spice to it.”

As the singers often appear on TV and game shows, it also brings them closer to the audience, she added.

“Korean entertainment is so open to fans. For example, we know many American songs, but we have no idea what kind of person the singer is,” she said.

“But for Korean singers, we are able to know the person by witnessing what they are like in different situations. And we become attracted to not only their singing, but also their attitudes and personalities.”

According to Belyakova, who operates an official Web site for Super Junior in Russia, K-pop is being recognized by thousand of Russians in their 20s.

Her fan-club forum (www.superjunior.ru) started with only several hundred members but has already grown to almost 9,000.

Showing the attention to detail typical of a diehard fan, one of her postings reads, “2009 June 29, Super Junior leader Leeteuk said ‘thank you’ in Russian for the first time on his personal home page.”

“The fan club is actively engaged in fan-type projects for Super Junior, such as using their names to make charitable donations, taking part in international projects and organizing trips overseas to see world tour concerts,” she said, adding that there are at least a dozen more fan sites in Russia for other K-pop groups including TVXQ, SHINee and 2PM.

“It wasn’t a usual concert, but more like a show,” said Belyakova, adding that some of the things that attracts her to K-pop shows are the glamorous and often unpredictable performances.

“When I watched the ‘Super Show 3,’ all of the band members were running around the stage and even flying around our heads,” said Belyakova. “It felt amazing. I was holding a blue glowstick in my hand and thousands more fans around me were also waving blue light-sticks.”

She said Russians tend draw the line at fanaticism, however, unlike some Asian fans.

“I noticed that [they] usually like to follow [the bands] everywhere and wait in front of buildings and agencies,” said Belyakova. “But Russian fans never try to get into the personal space of stars. We’ll never try to get an autograph or take a picture secretly upon meeting them in person. I think it is very rude and it is important to protect the privacy of your idol.”

On Aug. 30, she brought one Indonesian and five Russian friends to the COEX center in southern Seoul to watch the musical “Temptation of Wolves.” Super Junior member Ryeo-wook plays a leading character in the musical.

“We studied the etiquette of watching musicals in Korea before coming here,” said Skiba Olga, 28, who arrived a week before Belyakova. “In Russia, it is usual for the audience to go up to the stage and hand flowers to the actors and actresses, but I heard there is no such custom in Korea.”

The five Russian girls will make a birthday present for another Super Junior member, Yesung, as it was his birthday on Aug. 24; or, more accurately, they will make a present for his mom and dad.

“We are going to make a photo album for his parents with pictures of Yesung,” said Belyakova.

Also on the girls’ itinerary is a date with Kim Hee-chul, another member of the same band, who they will help see off when he embarks on his two-year-long military service on Sept. 1.

Anna Savrasova, 27, admits she has a huge crush on Hee-chul. After expressing how proud she felt at learning he was going to serve his country, she said in Korean, “I’ll wait for you, Kim Hee-chul.”

As the music’s global fan base grows, fans recently designated Aug. 13 as WorldWide K-pop Day, when they encourage each other to upload videos on YouTube to show their support for various bands.

Aida Ausum, 18, who lives in Holland, uploaded a video to “tell Korea that there are more countries in the world that love K-pop.”

In her video, she appealed to Korean singers to pay more attention to their fans in other parts of the world.

“My friends and I decided to do something for WorldWide K-pop Day because we’ve been dying to make a statement that we are here,” she said in the recording.

In an e-mail interview with the Korea JoongAng Daily, Ausum said she was “surprised to find other K-pop fans in Holland as it is a fairly small country .?.?. there is a wide range of fans [there] aged 14 to 25.”

“Recently, my friends and I began organizing gatherings for K-pop fans to hang out with [like-minded] people,” she said. “We go to parks and dance to K-pop songs and discuss K-pop artists.

“Right now, people are actually planning a large-scale flash mob [to urge bands to perform in Holland] and we’ve been practicing really hard.”

This hints at foreign fans’ major complaint: a dearth of concerts they can attend without requiring a passport.

Belyakova also bemoaned the difficulty of legally downloading Korean artists’ songs as Web sites require users to have resident registration numbers, which are only available in Korea.

“Some Web sites allow foreign users to register, but the procedure is so difficult and it requires authentication procedures that just never work,” she said. Tickets for concerts and musicals are often only available for people with a Korean credit card, she added.

“That’s why we couldn’t get tickets earlier for the musical,” said Belyakova. “I had to ask my Russian friend living in Korea with her Korean husband to use his credit card to buy us tickets.”

Additionally, she said she received bulk orders for Super Junior albums back in Moscow that she is wondering if she will be able to transport home.

“More than 100 orders were made. I’m going to buy each one separately, with a separate receipt, so they can be counted on Hanteo, which ranks bands according to the sales of artists’ albums,” said Belyakova, loyal to the end. “If we buy all 100 at the same time, it only counts as one sale.”


*The Korea JoongAng Daily launches the first of a five-part series about the status quo and prospects of the Korean Wave.