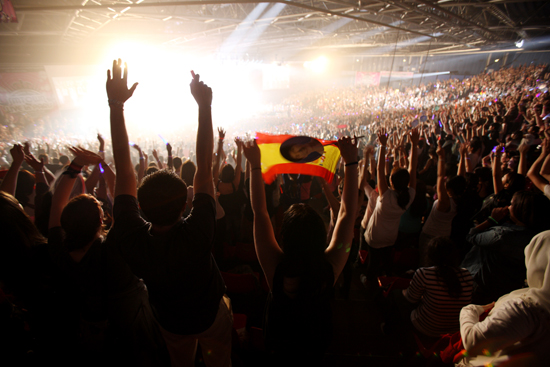 Thousands of fans in Europe fill up the Zenith de Paris concert hall to attend two days of performances by bands signed to SM Entertainment in the French capital. TVXQ and Girls’ Generation, were among the line up. [YONHAP]

The Korean pop industry is enjoying its second wave of worldwide acclaim and is spreading from Asia to Latin America with the help of bundled concerts and international competitions.

Last Wednesday in Brazil, 20 local teams competed in Sao Paulo at the “2011 K-pop Cover Dance Festival,” which was hosted by a committee of the Visit Korea Year tourism campaign. K-pop fans there got the chance to flatter the K-pop groups judging the contest by emulating their hit songs. The competition was judged by 2PM, Super Junior, Girls’ Generation, SHINee, KARA, B2ST, MBLAQ, miss A and T-ara.

The Sao Paulo event followed successful stops in Los Angeles and Tokyo. The judges head to Bangkok on Sunday and Madrid on Monday before flying back to Korea on Sept. 23. Contestants who make the cut in the regional qualifying rounds will be invited to compete for the grand prize in Gyeongju, North Gyeongsang.

Meanwhile, on Sunday, K-pop laid siege to the Paseo la Plaza, a landmark cultural complex in Buenos Aires, Argentina. Fourteen teams from six countries, including Costa Rica, Dominican Republic and Brazil, showed off their choreographed dance routines while singing in Korean to a crowd of over 500 young Latin Americans and the Argentine diplomatic corps. The event was hosted by the Korean Culture and Information Service.

Concerts by K-pop artists are also enjoying a renaissance outside Asia, with a recent performance in France in June selling out within 15 minutes, as European fans swarmed to snap up tickets for a branded musical tour by SM Entertainment.

In fact, young people in the region were so hungry to catch the show that they congregated outside the Louvre museum to demand an encore performance after learning that the tickets had gone.

The concert, which was held at Le Zenith de Paris on June 10, made headlines in Korea and France, which would have been highly unlikely five years ago. It also prompted a new trend of branded, or bundled, concerts featuring artists signed to a single entertainment agency.

SM Entertainment recently wrapped up just such an event with three days of concerts in Tokyo dubbed “SM Town Live in Tokyo Special Edition” that attracted a total of 150,000 fans Sept. 2-4. The shows featured most of the agency’s top stars, such as Girls’ Generation, f(x), Super Junior and TVXQ. 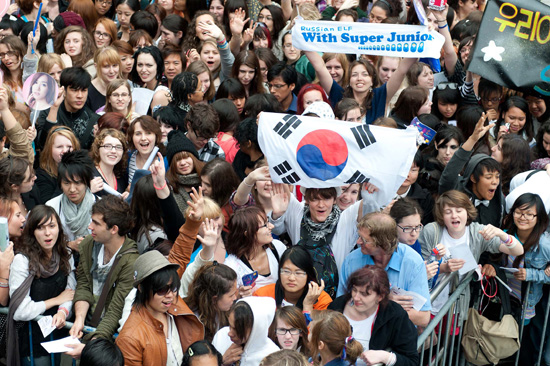 A foreign K-pop fan holds up Korea’s national flag while waiting to attend the “SM Town Live in Paris” concert on June 10 at the Zenith de Paris concert hall in the French capital. By Seo Min-jeong

In an interview with the online site of the Hankook Ilbo, Kim Young-min, SM’s 40-year-old CEO said: “Branded concerts create a greater ripple effect than any single pop group can.” They also act as bridges, or “gateways,” by migrating fans over from band to band, he added.

JYP Entertainment followed suit last month with a two-day show featuring all of its top signings - Wonder Girls, 2PM, 2AM, San E, Joo, Lim Jeong-hee and miss A - at the Saitama Super Arena in Japan Aug. 17-18.

And Cube Entertainment brought Beast, 4Minute and more of its top acts to the island country last month for its “United Cube concert in Japan.” Citing the runaway success of the show, Cube said a follow up is scheduled for next month.

“Even if these concerts are money losers [in the short term], we want to hold more of them overseas in major cities like Sao Paulo and London to promote the brand,” Hong Seung-sung, CEO of Cube Entertainment, said in an interview with MBC last month.

Korean pop stars have also been coming together across the board for huge performances irrespective of which label or agency supports them.

In January, the “Super K-pop Concert Sydney 2011” was held at Sydney Town Hall to celebrate the 50th anniversary of diplomatic ties between Korea and Australia. About 2,000 local citizens and Korean-Australians made sure the first K-pop concert in the city was a full house. 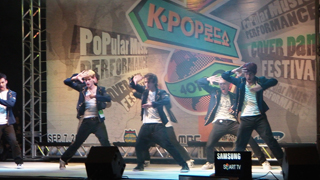 K-pop fans in Brazil compete at the “2011 K-pop Cover Dance Festival” this month in Sao Paulo. Twenty teams vied for a shot at winning a free trip to Korea, as K-pop artists judged their performances.

Due to popular demand, SM Entertainment is taking its major money makers to the Big Apple in October after K-pop fans staged a flash mob in Central Park in June calling for more concerts. The performance will take place at Madison Square Garden in Manhattan on Oct. 23 and K-pop artists, including Super Junior and f(x), will perform. Tickets went on sale on Sept. 9 and are priced from $44.50 to $204.50.