From China, Jeju will see its biggest tour group

From China, Jeju will see its biggest tour group 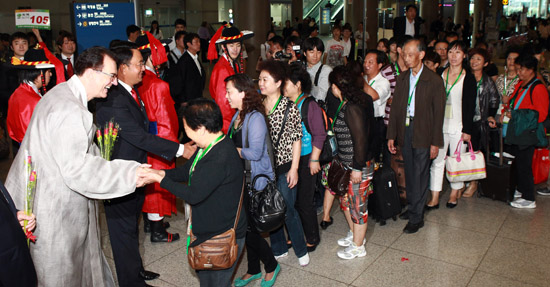 
Jeju Island will see its largest tourist group in its history, with nearly 11,000 Chinese visitors expected to travel to the southern island this month.

The record-setting tour group is made up of employees of Baojian, a Chinese direct sales company for health care products, after the firm signed an agreement with Jeju Special Self-Governing Province in June. The 10,789 visitors from Baojian are employees who recorded excellent sales in 2010 and will be divided into eight tour groups over the next month.

The first batch of visitors, about 1,400 people, arrived at Incheon International Airport yesterday to embark on their six-day itinerary, which will bring them through Seoul and Jeju. On hand to welcome Jeju’s largest tourist group were several officials, including Lee Charm, head of the Korea Tourism Organization.

Through the end of the month, the 10,789 visitors are expected to use 280 chartered buses and occupy 14,300 rooms in 16 different hotels. Jeju’s government expects about 90 billion won ($83.4 million) in economy benefits, including 40 billion won in direct benefits in local areas.

Baojian has been sending its employees on reward trips since 2005, including 9,800 tourists to Taiwan in 2009. In Korea, Baojian employees are scheduled to visit several landmarks, including Gyeongbok Palace, Korean Folk Village and Ilchul Peak on Mount Seong.

The most persuasive pitch, however, was Jeju’s offer to rename some of its roads after the Chinese company. In June, in keeping its promise, Jeju renamed in several roads in Yeon-dong “Baojian Streets.”

A tourism official said the offer to change street names brought great interest from Baojin, which changed its tour location from Japan to Korea for this year.

One message posted on the company’s Web site read, “Korea specially named some of their streets on Jeju Island after our company,” adding, “About 10,000 Baojian employees will create ‘Chinese Waves’ in Korea as civil envoys for China.”