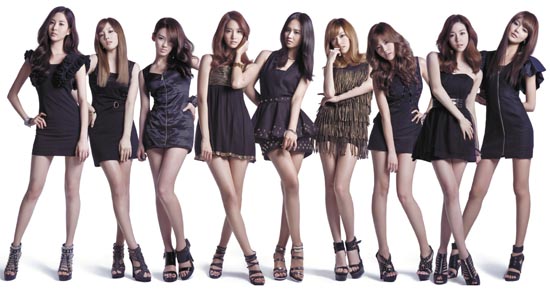 Collaborations with foreign artists are contributing to the re-whetted appetite for Korean culture overseas as the nation’s three major entertainment companies increasingly pursue transcontinental projects to keep the hype machines for their signed bands fully oiled.

SM Entertainment, which began reaching out to foreign artists back in the late 1990s, is most active in this field.

Looking for more depth than is commonly associated with K-pop, SM turned to Finnish band Nylon Beat, and specifically the song “Like a Fool.” It then translated the lyrics into Korean and had one of its bands, S.E.S., produce a cover version under the name “Dreams Come True” for their second album in 1998.

This began a trend that SM has pushed ever since. Recent hits such as “Tell Me Your Wish” and “Run Devil Run” by Girls’ Generation were both composed by Norway-based Dsign Music, while the group’s other hit single, “Hoot,” was composed by Denmark-based DEEKAY Music. 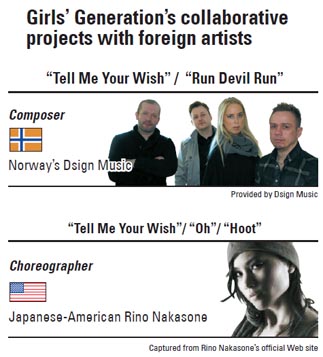 When asked how he felt about the success of the songs in various markets, Robin Jenssen of Dsign Music, said “We are over the moon about it.”

“Me, my producers and writers have been working hard to get into the Asian market for many years, so this is a big achievement for us.” Design Music also worked with other SM artists including BoA, f(X) and TVXQ.

“For the Korean market, we have to think of many things. For instance, there are more syllables in the Korean language, so we have to take that into consideration when we write the melodies,” Jenssen added.

“The Korean audience is very style-conscious, so no shortcuts.”

Grammy Award-winning producer Eliot Kennedy worked on the single “I Don’t Like Weak Men” by girl group SISTAR. American producer Teddy Riley, who teamed up with Michael Jackson on his “Dangerous” album, also served as a producer for RaNia, another girl group.

“They are always seeking something new,” said music critic Bae Soon-tak. “Additionally, once a certain song becomes popular in Korea, composers tend to make similar songs in hopes of hitting the jackpot again.”

This kind of international collaboration also extends to choreography.

The so-called “crab leg dance,” a dance routine used by Girls’ Generation in the music video for “Tell Me Your Wish,” was devised by Japanese-American Rino Nakasone. She previously worked with Justin Bieber and Britney Spears.