Whispers of factions as ruling party looks to Na

Whispers of factions as ruling party looks to Na 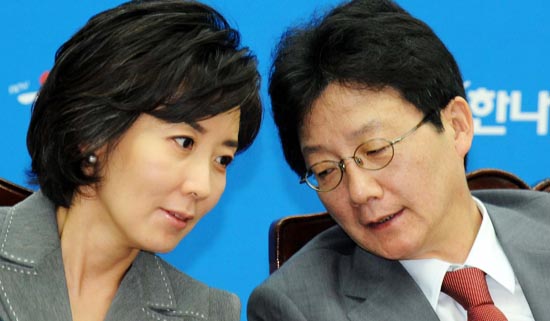 Na Kyung-won, left, a GNP lawmaker and possible candidate for Seoul mayor, talks with Yoo Seong-min, a GNP lawmaker and close aide to Park Geun-hye, a frontrunner for next year’s presidential race, yesterday at a GNP leadership meeting at party headquarters in Yeouido, western Seoul. [NEWSIS]


Struggling to field a mayoral candidate against the opposition’s newly invigorated Park Won-soon, the ruling Grand National Party expressed hope yesterday that Representative Na Kyung-won would soon throw her hat in the ring for City Hall.

Despite the fast approaching Oct. 6 registration deadline, Na, who has been widely expected to be the GNP’s choice, has yet to announce her candidacy.

The 47-year-old judge-turned-lawmaker is considered one of the ruling party’s political celebrities. Having served as the GNP’s spokeswoman, Na is also a familiar face to the public.

Na’s seeming delay has shown how the GNP has struggled in recruiting a high-profile contender who is willing to both take on a liberal activist recently endorsed by new kingmaker Ahn Cheol-soo, the famed software mogul and darling of the country’s left, and placate the whims of the GNP’s queen bee and former chairwoman, Park Geun-hye, whose eye is squarely on the Blue House.

Indeed, some media outlets have reported that Na’s reluctance has been due to fear that her candidacy will be rejected by Park Geun-hye loyalists, with speculation running rampant that Park Chung Hee’s daughter would not want another high-profile female politician in her midst in the run-up to next year’s presidential election.

Na has also complained that Park failed to help former Seoul Mayor Oh Se-hoon in the school lunch referendum gamble that cost him his job, with many inside the GNP believing that Park loyalists would not find Na palatable.

Senior members of the Park faction, however, denied the speculations yesterday, adding some momentum to a possible Na run. “I am very concerned about some media reports that portrayed factional views about the Seoul mayoral candidates,” said Representative Yoo Seong-min at a GNP leadership meeting. “It is wrong to think and wrong to report that one faction is vetoing a certain candidate.”

Another Park loyalist, Representative Lee Kyeong-jae, also denied the reports. “There were reports that the GNP has a good candidate but a faction was vetoing the contender. But the time has come for us to unite and walk the path of victory.”

Lee said the party could not wait forever for a strong outsider candidate, adding that the ruling party still had many strong contenders.

“Look here, we have a celebrity,” Lee said at the leadership meeting, where Na was also present.

Another key Park loyalist added: “If Na accepts all party platforms that will be decided in the future, including welfare issues, there is no reason for Park to not support her. It is my understanding that such a message was delivered to Na already.”